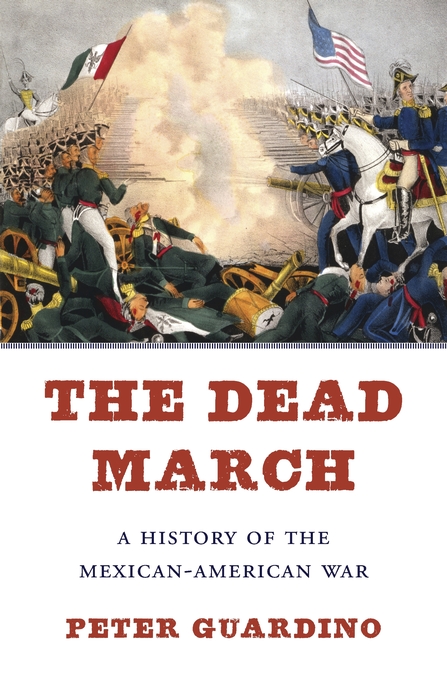 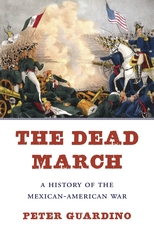 A History of the Mexican-American War

“Like so much of the best recent scholarship, The Dead March incorporates the work of Mexican historians and anthropologists in a story that involves far more than military strategy, diplomatic maneuvering, and American political intrigue. At its core, The Dead March is a social and cultural history of the Mexican and American armies and the societies that produced them, particularly their assumptions about race, masculinity, and religion… A book studded with arresting insights and convincing observations.”—James Oakes, New York Review of Books

“Guardino’s narratives of military engagements are captivating… His close attention to the human tragedy of the ‘dead march’ offers a model of how students of military history might investigate such conflicts in the future.”—Jocelyn Olcott, American Historical Review

“Superb… The Dead March is a remarkable achievement, by far the best general account of the war now available. It is critical, insightful, and rooted in a wealth of archival sources; it brings far more of the Mexican experience than any other work not specifically focused on Mexico; and it clearly demonstrates the social and cultural dynamics that shaped Mexican and American politics and military force.”—Samuel J. Watson, Journal of American History

“A superb account of events leading up to the war on both sides and to the war itself.”—Barbara A. Tenenbaum, The Americas

“Presents a comprehensive and exciting New Military History that portrays the conflict from the point of view of ordinary people on both sides… This excellent work, suitable for U.S. and Mexican scholars, students, and wider readers, resets our evaluation of the US–Mexican War. The Dead March reveals a North America more similar and sisterly than historians have generally shown.”—Stephen Neufeld, Canadian Journal of Latin American and Caribbean Studies

“Both thought-provoking and highly engaging. Drawing heavily from the letters, journals, and memoirs of participants, this social history humanizes the combatants and promotes a deeper understanding of the common soldier and civilian than perhaps any other previous work.”—Michael Scott Van Wagenen, Hispanic American Historical Review

“A masterful telling of the Mexican-American War… [It] is written in such a way that it will be appealing to all readers. Scholars will benefit from Peter Guardino’s immense expertise in both U.S. and Mexican history and from the book’s complex interwoven arguments concerning issues of race, religion, and gender.”—Maria Angela Diaz, Journal of the Civil War Era

“Guardino’s work offers much more than a general survey of the Mexican-American War. By delving into how the war’s participants reacted to social issues and how these issues influenced the outcome of the war, The Dead March provides scholars with a unique perspective on the war as experienced by common soldiers and civilians. Guardino’s discussion of the Mexican perspective of the war yields a nice addition to a field that is largely dominated by works that examine the war from an American perspective.”—Brady L. Holley, Journal of Military History

“The history of a war of expansion and empire that reverberates today in talk of border walls and deportation. Viewed through a retrospective lens, the American invasion of Mexico in 1846, an act of single-sided aggression, has eerie parallels with later incursions in Vietnam and Iraq. For one thing, all were adventures that enjoyed public support at first but that lost backing as time wore on. It was also precipitated, writes Guardino in this vigorous, readable account, by an American president who ‘had to hide crucial information and engage in intense partisan maneuvering to start the war.’… In a narrative that blends set-piece accounts of battle, profiles of individual combatants, and wide-ranging explorations of larger issues, Guardino examines the inevitability of American victory, which proved Pyrrhic. Some of our received wisdom about the conflict, he argues, does not hold up… The Mexican-American War is too little studied today. Guardino’s swift-moving, broad-ranging history is a welcome remedy.”—Kirkus Reviews

“The U.S. war with Mexico (1846–48), an often overlooked part of American history, had a huge impact on the development of both countries. Guardino presents the story of the war through the eyes of common soldiers in Mexican and American armies… Guardino presents a balanced and deeper understanding of the war, challenging readers to determine why and how America triumphed and the long-term ramifications for both countries.”—Michael C. Miller, Library Journal

“By examining the motivations and viewpoints of fighters on both sides, Guardino presents a balanced and deeper understanding of the war, challenging readers to determine why and how America triumphed and the long-term ramifications for both countries… Extremely well-researched and highly readable.”—Publishers Weekly

“The Dead March builds a wonderful, sustained case for the deep similarities between the two countries, their struggles, and the circumstances of their fighting men. The material on both armies is superb. We are given marvelously lucid, textured, and probing explanations for why and how men came to serve in these armies; how they were viewed by their countrymen and women; what they experienced on march and in camp. The narrative of particular battles and confrontations is engrossing and illuminating. And the military history is surrounded by smart, compelling, analytic sections on a host of important topics. This book sets the new standard for histories of the war that cost Mexico half its national territory.”—Brian DeLay, author of War of a Thousand Deserts: Indian Raids and the U.S.–Mexican War

“Guardino breaks new ground and offers novel information about the day-to-day reality of the war. By featuring the lived experience of the soldiers and ordinary people who took part in the conflagration, Guardino gives us a more realistic view of Mexico and the United States in the middle of the nineteenth century, correcting widely held but ultimately unwarranted assumptions about vast political and military discrepancies between the two nations. In short, this book constitutes the most insightful and balanced treatment of the war that I know of.”—Andrés Reséndez, author of The Other Slavery: The Uncovered Story of Indian Enslavement in America