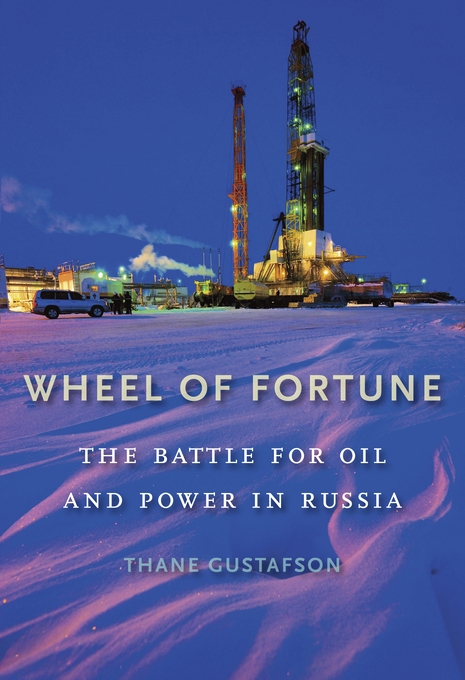 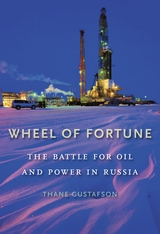 The Battle for Oil and Power in Russia

“An authoritative history of Russia’s oil industry in the first two decades of the post-Soviet era.”—Ed Crooks, Financial Times [01/24/20]

“The history of Russia’s oil industry since the collapse of communism is the history of the country itself. There can be few better guides to this terrain than Thane Gustafson, a professor of government at Georgetown University who has been studying Russia and global oil for more than three decades. His Wheel of Fortune stands out amid a series of recent books on Russia, combining meticulous research with a storyteller’s gift.”—Neil Buckley, Financial Times [06/01/13]

“Few have studied the Russian oil and gas industry longer or with a broader political perspective than Gustafson. The result is this superb book, which is not merely a fascinating, subtle history of the industry since the Soviet Union’s collapse but also the single most revealing work on Russian politics and economics published in the last several years.”—Robert Legvold, Foreign Affairs

“Thane Gustafson has produced what will surely be the definitive work on this subject… For the past twenty years Gustafson has shuttled back and forth to Russia, getting to know many of the key players. Having been present at the creation, he is uniquely placed to combine an insider’s knowledge of how the industry works with academic analytical skills and a sophisticated understanding of Russian culture and politics.”—Peter Rutland, Times Literary Supplement

“Thane Gustafson’s Wheel of Fortune is the fullest account so far of Russian oil in the 1990s and 2000s… Wheel of Fortune is…built on an impressive grasp of the way the Russian oil industry works. But its arguments also have a wider relevance for understanding the country’s post-Soviet fortunes… What Wheel of Fortune describes is not so much the displacement of private companies by a state-led model as the creation of a new hybrid form… This blurring of the personnel, motivations and strategic orientations of state and private sectors is the hallmark of contemporary Russian capitalism. No one reading this book could think the Soviet system is simply being re-created under Putin: the most likely outcome of another round of privatizations, it suggests, is a concerted attempt by the state-business elite to turn the companies it controls into private property.”—Tony Wood, London Review of Books

“A thorough history…of the symbiosis of oil and politics since the unraveling of the Soviet Union. Gustafson masterfully cuts through the confusion of the immediate post-Soviet period to distil a clear narrative about the struggles of the first Russian oil majors and the oligarchs who came to control them; the contributions and failures of international investment in Russia’s oil sector; the genesis of energy-attuned leaders; and the evolution of the institutions regulating the sector today. After four decades of studying Soviet/Russian politics and a concurrent two decades of leading IHS CERA’s Russian and Caspian energy consulting team, Gustafson has a rare combination of academic understanding and industry acumen, which informs a top-notch analysis of the forces shaping Russia’s current economic and political trajectory. The book takes readers through stories of a motley cast of characters: from a handful of obscure Siberian oil generals who inherited control of prize fields, to budding businessmen who rose to become some of the richest in Russia, to public servants for the city of St. Petersburg who came to dominate the country’s political machine. Gustafson’s research draws on scores of personal interviews with key government and industry players over 20 years. With a keenly observant eye, Gustafson tracks the impact that each of these individuals had on the course of development of the oil industry and its relationship with the political apparatus.”—Catherine Yusupov, International Affairs

“Russian oil has had a bumpy ride. The world leader in the 1980s, the industry went into steep decline with the Soviet Union’s dismantling in 1991. When the Iron Curtain rose, the state’s oilmen—mostly geologists and engineers—were shocked by a global industry rife with lawyers and traders. Now oil and roubles shunt through the pipelines of new Russia but the relationship between state and industry is often explosive. Energy-policy analyst Thane Gustafson reveals Vladimir Putin’s pivotal role, the effects of the 2008 crash, and the complex currents and uncertain future of regional oil.”—Nature

“A book considered by some as the bible on the history of Russian oil.”—Jason Corcoran, bne IntelliNews

“Tells the story of how the industry evolved during the two decades following the dissolution of the Soviet Union in 1991, competing for or holding the top spot again since 2008.”—John Bowlus, Energy Reporters

“Gustafson has made an important contribution to the study of Russian capitalism.”—Y. Polsky, Choice

“Gustafson notes that the Russian oil economy is at a crossroads, with no clear signal ahead. It might well revert to state control, or it might become a free-market leader… A useful, readable primer in a specialized but strategically important corner of geopolitics.”—Kirkus Reviews

“For specialists in geopolitics or global energy, this exacting and lucid account should be required reading.”—Publishers Weekly

“Thane Gustafson is the master expert on Russia’s vast oil and gas industry. In his latest book, which is meticulously researched and lucidly written, he tells the story of the past two decades as the hydrocarbon-rich Eurasian giant has sought, in fits and starts, to shuck its Soviet past and become a normal, modern nation, integrated into the global economy.”—Strobe Talbott, President, Brookings Institution

“Thane Gustafson has seen close up the wrenching challenges in the Russian oil industry. This is an excellent book written from firsthand experience.”—Lord Browne of Madingley, Group Chief Executive, BP plc, 1995–2007

“Wheel of Fortune not only provides the most comprehensive history of the Russian oil sector to date, but its greatest virtue is that it places the industry’s rise in a broader political and historical context that only a deep observer like Thane Gustafson can provide.”—Francis Fukuyama, author of The Origins of Political Order

“A tale of the struggle for power and money in the Russian oil industry—with fateful consequence for both Russia and the world.”—Andrew Gould, former Chairman and Chief Executive Officer, Schlumberger Limited