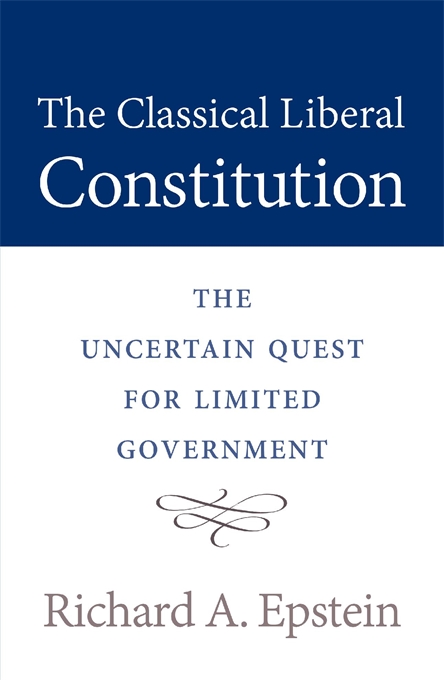 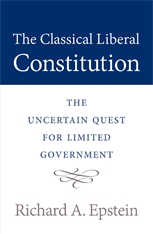 “Epstein has now produced a full-scale and full-throated defense of his unusual vision of the Constitution. This book is his magnum opus…Much of his book consists of comprehensive and exceptionally detailed accounts of how constitutional provisions ought to be understood…All of Epstein’s particular discussions are instructive, and most of them are provocative…Epstein has written a passionate, learned, and committed book.”—Cass R. Sunstein, New Republic

American liberals and conservatives alike take for granted a progressive view of the Constitution that took root in the early twentieth century. Richard A. Epstein laments this complacency which, he believes, explains America’s current economic malaise and political gridlock. Steering clear of well-worn debates between defenders of originalism and proponents of a living Constitution, Epstein employs close textual reading, historical analysis, and political and economic theory to urge a return to the classical liberal theory of governance that animated the framers’ original text, and to the limited government this theory supports.

Grounded in the thought of Locke, Hume, Madison, and other Enlightenment figures, the classical liberal tradition emphasized federalism, restricted government, separation of powers, property rights, and economic liberties. The most serious challenge to this tradition, Epstein contends, has come from New Deal progressives and their intellectual defenders. Unlike Thomas Paine, who saw government as a necessary evil at best, the progressives embraced government as a force for administering social good. The Supreme Court has unwisely ratified the progressive program by sustaining an ever-lengthening list of legislative programs at odds with the classical liberal Constitution.

Epstein’s carefully considered analysis addresses both halves of the constitutional enterprise: its structural safeguards against excessive government power and its protection of individual rights. He illuminates contemporary disputes ranging from presidential prerogatives to health care legislation, while reexamining such enduring topics as the institution of judicial review, the federal government’s role in regulating economic activity, freedom of speech and religion, and equal protection.

The central mission of The Classical Liberal Constitution is to go against the grain of modern Supreme Court jurisprudence and much of the legal scholarship that has grown up around that body of work. The motivation for this argument should be apparent from the major disarray that infects every area of modern American life: steady decline in the average standard of living; constant battles over debt limits and fiscal cliffs; uncertainty over key elements of the tax structure; massive overregulation of the most productive sources in society (health care and financial services); government-inspired brinksmanship in labor negotiations; and runaway redistribution programs that undercut the economic production that makes these programs viable. All of these major programs could not have happened under the original constitutional structure, faithfully interpreted in light of changed circumstances. The confluence of these events cannot be dismissed as the result of random noise or simple mistakes. Rather, they are the ultimate consequence of the profound progressive break with the classical liberal tradition that was the guiding genius in the drafting and interpretation of the Constitution.
—From the book