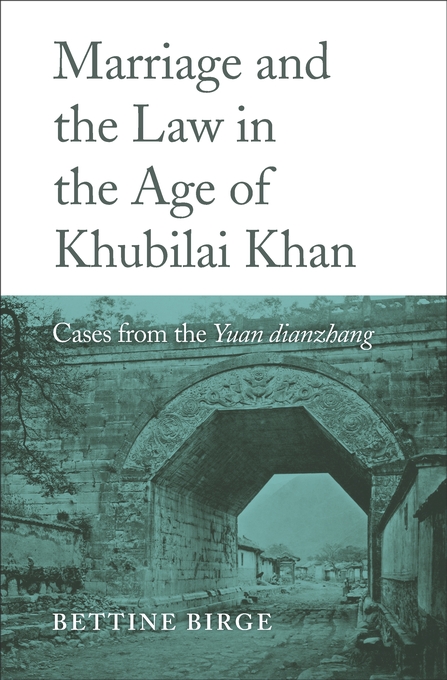 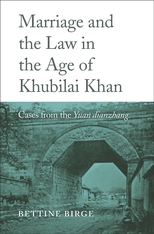 Marriage and the Law in the Age of Khubilai Khan

Cases from the Yuan dianzhang

The Mongol conquest of China in the thirteenth century and Khubilai Khan’s founding of the Yuan dynasty brought together under one government people of different languages, religions, and social customs. Chinese law evolved rapidly to accommodate these changes, as reflected in the great compendium Yuan dianzhang (Statutes and Precedents of the Yuan Dynasty). The records of legal cases contained in this seminal text, Bettine Birge shows, paint a portrait of medieval Chinese family life—and the conflicts that arose from it—that is unmatched by any other historical source.

Marriage and the Law in the Age of Khubilai Khan reveals the complex, sometimes contradictory inner workings of the Mongol-Yuan legal system, seen through the prism of marriage disputes in chapter eighteen of the Yuan dianzhang, which has never before been translated into another language. Birge’s meticulously annotated translation clarifies the meaning of terms and passages, some in a hybrid Sino-Mongolian language, for specialists and general readers alike. The text includes court testimony—recorded in the vivid vernacular of people from all social classes—in lawsuits over adultery, divorce, rape, wife-selling, marriages of runaway slaves, and other conflicts. It brings us closer than any other source to the actual Mongolian speech of Khubilai and the great khans who succeeded him as they struggled to reconcile very different Mongol, Muslim, and Chinese legal traditions and confront the challenges of ruling a diverse polyethnic empire.