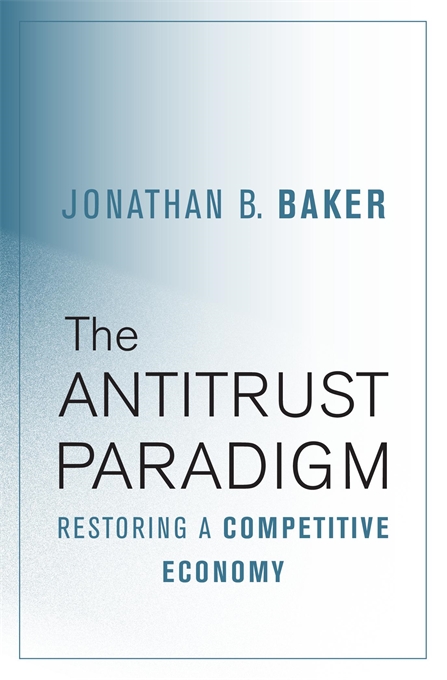 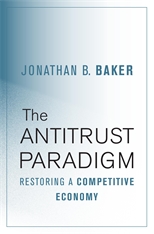 “An extremely valuable contribution to what he rightly notes is one of the most compelling current debates.”—Zephyr Teachout, Democracy

“An informed, thoughtful, and provocative antitrust manifesto that every antitrust thinker should read.”—Barak Orbach, Antitrust Source

“A good overview of the current debate about competition policy, and the Chicago School versus neo-structuralist (aka ‘hipster’) clash going on in the U.S. at the moment.”—Diane Coyle, The Enlightened Economist

“Contains a meticulous exploration of the most common theories of antitrust harm, spanning the rules on agreements, monopolies, and mergers. Baker focuses on these problems within the digital economy, seeking to make the case that despite its nineteenth century origins, the current U.S. antitrust framework is sufficiently nimble to meet contemporary challenges.”—Niamh Dunne, Project Syndicate

“A powerful argument for antitrust reform to bring about the benefits long and emptily promised by the Chicago School.”—Harvard Law Review

“The Antitrust Paradigm is a call to action by a premier scholar of competition policy. Baker makes a compelling case to change the guidepost for U.S. antitrust enforcement from ‘do no harm’ to ‘do some good.’ Anyone with a keen interest in antitrust should read this book, and I hope that includes some judges.”—Richard J. Gilbert, University of California, Berkeley, and former Deputy Assistant Attorney General for Economics in the Antitrust Division of the U.S. Department of Justice

“Baker’s timely book will be required reading for competition policymakers. It provides a concise, sophisticated, and informed account of nearly fifty years of change that has reshaped antitrust law and legal doctrine, and uses that account to identify much-needed reforms that would contribute to greater competitive vitality in the American economy.”—Andrew I. Gavil, Howard University School of Law

“Jonathan Baker has written a superb and timely treatment of one of the hottest economic issues: how to make the economy more competitive, especially in the face of rapidly changing technology. Baker draws on his research and policy experience to write a book that avoids the heated rhetoric that often dominates these debates to instead present a compelling analysis and prescription that is firmly grounded in economic research.”—Jason Furman, Harvard Kennedy School and former Chairman of the Council of Economic Advisers

“Jonathan Baker is one of the country’s leading antitrust scholars. This well-written and thought-provoking book meticulously sets forth the theoretical and empirical foundation for his view that antitrust policy needs to be radically changed and must become much more active if the United States is to remain a dynamic economy. Even readers who disagree will be challenged to reexamine the reasons for their views.”—Dennis W. Carlton, University of Chicago Booth School of Business and former Deputy Assistant Attorney General for Economic Analysis in the Antitrust Division of the U.S. Department of Justice

“Baker’s powerful and accessible prose makes the case for more vigorous twenty-first-century antitrust enforcement focused on market realities. He both diagnoses the problems and offers practical solutions. A must-read for those who care about ensuring markets that work to benefit consumers.”—Bill Baer, former Assistant Attorney General in the Antitrust Division of the U.S. Department of Justice and former Director of the Bureau of Competition at the Federal Trade Commission

“Why are citizens not experiencing market competition in daily life? And is there hope that antitrust enforcement might rise to the challenge? Jonathan Baker provides an insightful analysis of antitrust enforcement from the origin of the Sherman Act, through the anti-enforcement ideology of the Chicago School, to present-day, corporate-friendly policies. The Antitrust Paradigm illuminates why antitrust is fashionable again in policy circles. It presents the economic and legal evidence of the decline in competition in an accessible and compelling fashion and then goes on to provide intelligent and interesting recommendations of changes to make to address particular competition problems that characterize the modern economy.”—Fiona Scott Morton, Yale University School of Management

“Jonathan Baker’s book is a stirring and painstaking achievement in both intellectual and political terms. It offers not only a subtle takedown of the Chicago School’s conceptual dominance over American antitrust law but a powerful redefinition of how intensifying market concentration actually hurts our economy and our people. The Antitrust Paradigm builds up into the most rousing kind of call to arms: one that is rooted in rigorous analysis, vivid facts, and a margin of practical hope. Baker has written a profoundly useful book.”—Congressman Jamie Raskin (Maryland)