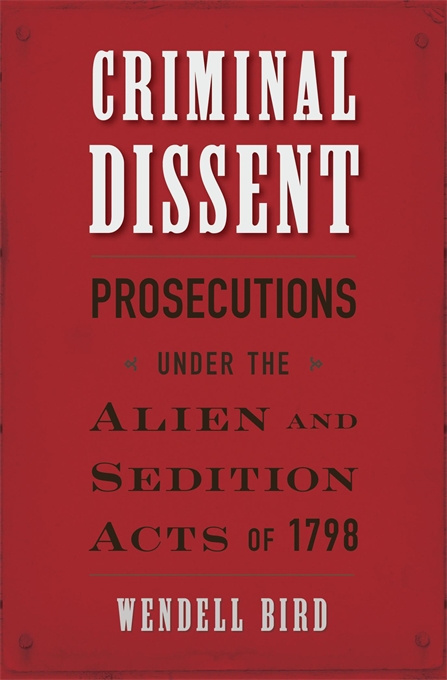 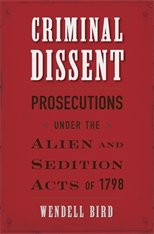 Prosecutions under the Alien and Sedition Acts of 1798

“Thoroughly researched… Bird has written a social as well as legal history of the Sedition Act prosecutions, and one is left worrying about hungry families, widows succeeding their printer husbands, and the happy vehemence with which the Federalists drove their opponents into poverty.”—Jack N. Rakove, American Historical Review

“An exhaustive taxonomy of the prosecutions that took place under these high-handed laws. Doggedly scouring federal court records as well as the papers of such notorious partisans as Secretary of State Timothy Pickering, Bird persuasively argues that the Federalists’ attempt to squash opposition and the free flow of ideas was even more nefarious than we thought… These acts legalized xenophobia, paranoia, censorship, and repression… The Federalist commitment to criminalizing dissent chills the blood, especially today.”—Brenda Wineapple, New York Review of Books

“Bird assembles a newly comprehensive account of sedition prosecutions and deportations… [He] confirms the picture of a targeted harassment campaign by the Adams administration against its Republican critics… The meat of the book offers a meticulous recounting of individual cases.”—Sara Mayeux, Journal of the Early Republic

“The leading account of the period—Freedom’s Fetters by James Morton Smith—is more than 60 years old. Wendell Bird’s book may be the definitive account for the next 60… Urges readers to see the centrality of this early debate around speech and press rights… Bird defines the heart of this early debate as one that recurs, though wearing new clothes, in each era.”—Marc Lendler, The Historian

“Bird has deepened and expanded the historical scholarship about the legal history of the 1790s Alien and Sedition Acts… Future historians will mine his impressive research achievements… Bird hopes that his work serves as a warning against modern administrations on the issue of speech and press liberties.”—Thomas C. Mackey, New England Quarterly

“Historians have been kind, sometimes surprisingly so, to Federalist John Adams, but that lapse has been corrected in spades by the publication of Criminal Dissent by Wendell Bird.”—Gerald F. Uelmen, Western Legal History

“Furthers our understanding of the period’s legal practices through a detailed and sophisticated treatment of criminal prosecutions. Most broadly, it offers useful insights into the complex relationship between law and politics, the historical origins of the First Amendment, and the need for strong, transcendent principles of basic rights.”—Daniel Kanstroom, Journal of Interdisciplinary History

“A definitive account of the life and death of the Sedition Act… The importance of Criminal Dissent is, in large part, due to the time in which we find ourselves: a conservative Court with at least one strident originalist who has had great success in pulling the Court in his interpretative direction. Indeed, Bird’s comprehensive research puts the lie to Justice Thomas’ arguments that Blackstone is the answer, that freedom of the press was viewed narrowly, and that the Sedition Act tells us little about the meaning of free speech. And it does so—importantly—on Thomas’ originalist terms. Criminal Dissent should be a feature in coming Supreme Court briefs.”—Matthew L. Schafer, First Amendment News

“For Americans who think they are living through a period of unprecedented partisan animosity, Wendell Bird’s new book Criminal Dissent, a history of prosecutions under the Alien and Sedition Acts of 1798, provides some useful perspective.”—Jacob Sullum, Reason

“[An] important book… The Alien and Sedition Acts represented the worst of the Federalists, a considerable stain on their legacy. Bird shows that the stain was worse and larger than previously understood.”—Eli J. Richardson, Law360

“Bird argues…that in some sense ‘everyone’ was harmed by the Alien and Sedition Acts, which created a chilling climate for political speech… A painstakingly researched, forcefully argued analysis of a period in American history that, as Bird points out, resonates with questions still faced in the present day.”—Alice Henton, Early American Literature

“By surveying the Alien and Sedition Acts prosecutions more thoroughly than has been done before, Bird makes clear the seriousness of the threats these statutes posed to freedom in the new republic. Had there not been the massive resistance to these acts that Bird so well demonstrates—in Congress, in the press, in juries, and even among judges—the repressive instincts that motivated then might not have been easily abandoned.”—David Anderson, author of Mass Media Law

“Wendell Bird combines wide and deep research, analytical skill, and clear and strong prose to illuminate the history of the Alien and Sedition Acts of 1798. In addition to his superb, thoughtful treatment of the Sedition Act—a landmark in the history of contests over the meaning of freedom of speech and freedom of the press—Bird enriches our understanding of the neglected Alien Acts. This fine book will be invaluable to any student of free speech and free press, of citizenship, of the early American republic, and of the formative period of U.S. constitutional history.”—R. B. Bernstein, author of The Education of John Adams

“Nothing in the historical canon is truly definitive, but Bird’s accounts of these prosecutions comes close. His lawyerly eye has unmasked a number of pseudonyms, addressed prosecutions of aiders and abettors, and even found a few Federalists who were targeted. A clear and compelling study.”—Peter Charles Hoffer, author of Uncivil Warriors: The Lawyers’ Civil War

“A benchmark history of the Alien and Sedition Acts and their place in the political culture of the 1790s. With encyclopedic erudition, Bird documents the legal history of criminalized dissent and the rhetoric of transatlantic revolution and reaction that drove partisan politics in the early republic. He also does something more: he restores the necessity of a vibrant, contested polity to its rightful place at the center of American political ideas. Never has the Jeffersonian argument for an active and dissenting citizenry been more important, and never before have we had a more thorough treatment of that argument’s origin and legacy.”—Matthew Crow, author of Thomas Jefferson, Legal History, and the Art of Recollection

“Thanks to Bird’s superlative sleuthing, now we know that Jeffersonian Republicans’ objections to the Alien and Sedition Acts were not based on novel arguments, many more people were targeted than we thought, not everyone targeted was a Republican, and few state legislatures supported the Adams administration’s campaign of repression. A must-read.”—Kevin R. C. Gutzman, author of James Madison and the Making of America