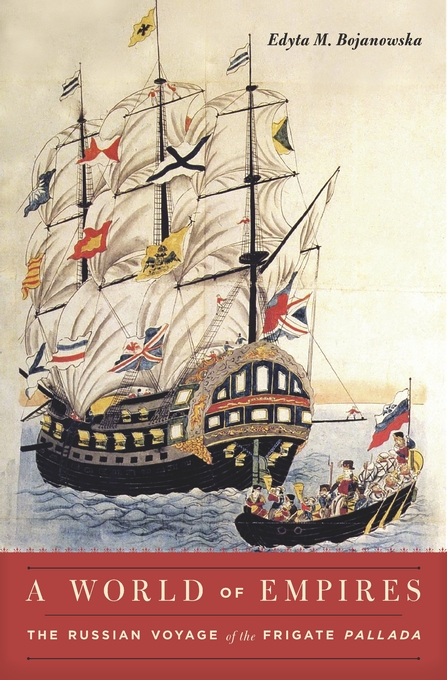 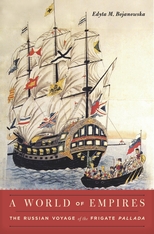 A World of Empires

The Russian Voyage of the Frigate Pallada

“Edyta Bojanowska’s engrossing book draws on the first-hand account of Ivan Goncharov, author of the classic novel Oblomov, to narrate the voyage which a Russian frigate made in the 1850s from St. Petersburg to Japan… Bojanowska explains how Goncharov was alive to notions of globalization long before that term entered our vocabulary.”—Tony Barber, Financial Times

“A fascinating, kaleidoscopic work buzzing with insight and overflowing with ideas… A World of Empires abounds with intelligence, wit, and erudition.”—Douglas Smith, Literary Review

“In this finely wrought and gracefully written book, Edyta M. Bojanowska examines Goncharov’s travelogue as both a unique literary work in its own right and a historical artifact that offers revealing insights into the Russian colonial imagination.”—Daniel Beer, The Times Literary Supplement

“Bojanowska’s account aims for a ‘productive conversation between the writer’s crafted vision of the world he saw, the history known then, and the history known now’. The result is most impressive. This book is at once history and literary criticism; it is political, economic and cultural; it is national, international and transnational—and, to top it off, Bojanowska makes this ambitious feat look effortless.”—Lara Douds, Times Higher Education

“In A World of Empires, Edyta Bojanowska opens an intriguing window on to this earlier age of globalization.”—Jeffrey Wasserstrom, Financial Times

“Bojanowska takes apart Goncharov’s account like a precious timepiece, examining each component to reveal a different side to Russia’s entry into the age of imperialism… A splendid exposition of the ways in which, from the 1850s onward, Russia’s history, like that of Belgium, France, the Netherlands, and the United Kingdom, was shaped by the process of colonization.”—Robert Legvold, Foreign Affairs

“A remarkable accomplishment… It reconstructs a truly complex and multilayered nineteenth-century discourse of empire and Russianness, globality and civilization, human difference and sameness… A fascinating intellectual journey.”—Marina Mogilner, Ab Imperio

“Fabulous and insightful… It is one of the most engaging academic studies I have come across in a long time. Of most direct interest to readers interested in the history of imperialism, Russian expansion, and nineteenth-century travel writing, it is worth the attention of a very wide readership.”—Brian Bonhomme, American Historical Review

“This book is a gem: intelligent, finely written, and original. Bojanowska analyzes the 1852 Pallada expedition through the account supplied by its Boswell, the famous and enigmatic Russian novelist Ivan Goncharov. But this is more than the story of a writer and his journey. The author casts light on the nature of Russia’s empire-making, and how it compares with rival imperialisms in the nineteenth century.”—Linda Colley, author of Captives: Britain, Empire, and the World, 1600–1850

“The hugeness of Russia and its territorial seepage into Asia are facts that many of its great writers celebrated but few personally experienced, at least as free subjects. One who did was Ivan Goncharov—novelist, lay ethnographer, naval secretary, and shrewdly observant travel diarist on the Pallada expedition. Skillfully utilizing his bestselling travelogue, Bojanowska tells the mind-bending story of Russia’s imperial coming-of-age.”—Caryl Emerson, Princeton University

“A World of Empires examines Goncharov’s famous travelogue as both a unique literary creation and a historical artifact that exposes the norms of its place and time. Bojanowska’s touch is remarkable. Moving with grace and erudition between literary criticism and history, she makes contributions to each. A rare accomplishment.”—Willard Sunderland, author of The Baron’s Cloak: A History of the Russian Empire in War and Revolution