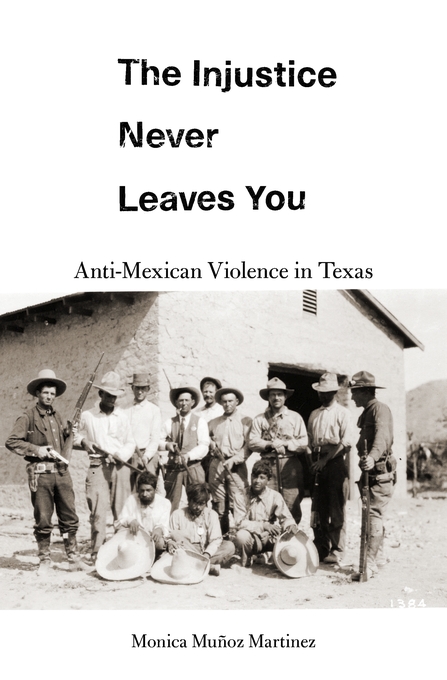 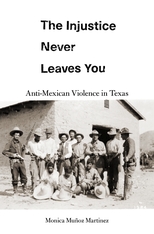 “One of Martinez’s most important contributions is to remind us that violence against nonwhites was not simply a matter of private citizens going out of control for private reasons… She links the experiences of Mexican-Americans to those of African-Americans, understanding that enforcing white racial supremacy, through violence and other means—disfranchisement and Jim Crow—goes to the very heart of the story of Texas.”—Annette Gordon-Reed, New York Review of Books

“Serves as a reminder that government brutality on the border is nothing new. In fact, it was the heart of the Texas Rangers’ mission a century ago.”—Lily Meyer, Los Angeles Review of Books

“The Injustice Never Leaves You serves as a long-overdue reality check on the Texas Rangers’ legacy. Martinez traces the group’s history from its relatively humble beginnings in the 1830s—as a small band of armed men organized by Stephen F. Austin to protect settlers—to what it had become by the late 19th century: a state-sponsored terror squad directed to secure white racial hegemony along the Texas-Mexico border… As a renewed militarization of the border takes place, along with new state-sponsored crimes against migrants—see the Trump administration’s cruel family separation policies, for one—it’s an apt moment for this book’s hard lessons of non-textbook Texas history to go mainstream.”—Michael Sandlin, Texas Observer [09/04/18]

“This is the book every Texan should read before casting their votes on border issues. It’s a sad, deeply disturbing account of the terrible atrocities and violence committed by Texas Rangers, law enforcement, and vigilantes against Tejanos and Mexicans in parts of rural Texas a little more than 100 years ago. This book should be standard curriculum in public schools and is a testament to the untold stories of so many who died and endured hardships and anti-Mexican violence at the hands of the government.”—Dallas Observer

“A groundbreaking work that lays bare the horrific reign of terror inflicted on innocent Tejanos, mostly in the Valley, by the Texas Rangers and affiliated mobs during the 1910s.”—Texas Observer [12/20/19]

“Absolutely amazing… A groundbreaking book that sheds light on the anti-Mexican violence along the Texas–Mexico border in the early part of the 20th century… No longer can the history of murder at the hands of the Texas Rangers and other law enforcement agencies be hidden. This book will prove to be the preeminent book that all others will consult when researching this period of history. Martinez’s scholarship is truly unparalleled. This one is an absolute must-read.”—Romeo Rosales, Book Riot

“An immensely powerful, haunting, and heartfelt book. It is a genuine page-turner that unflinchingly documents the history of violence and terror on the Texas-Mexico border… State racial terror and vigilantism worked hand in hand to establish a blueprint for sanctioned abuse and impunity.”—Ulices Piña, Latin American Research Review

“In 1915 and 1916, a time of revolutionary upheaval in Mexico, when refugees were streaming across the border, Texas Rangers and American soldiers declared open season on ethnic Mexicans in a time known as the ‘bandit wars.’ …Martinez explores a terrible history that reverberates today not only because of family memory and local curation…but also because so many of its particulars seem taken from current headlines as refugees continue to die in the desert… Timely and of considerable interest to students of borderlands history as well as of sociology.”—Kirkus Reviews

“With eloquence and corazón, Monica Muñoz Martinez has crafted a magisterial study of state-sanctioned vigilante violence in rural Texas. Drawing on institutional archives, oral histories, and family records, she has uncovered horrific events whose deep trauma has carried across generations. She is the first historian to document the anti-lynching campaigns mobilized by Mexican Americans, especially widows seeking justice for their murdered husbands. The Injustice Never Leaves You is a rare, field-defining book that reminds us of the power of historical memory.”—Vicki L. Ruiz, author of From Out of the Shadows: Mexican Women in Twentieth-Century America

“In this important and haunting book, Martinez not only documents the painful reality of anti-Mexican violence in Texas, she reveals how, despite the best efforts of the perpetrators, this violence was prevented from fading into oblivion because of the grassroots historical traditions of Tejano communities. The Injustice Never Leaves You opens up significant new insights on everything from state-building along the U.S.–Mexico border to questions of collective memory and historical trauma.”—Karl Jacoby, author of Shadows at Dawn: An Apache Massacre and the Violence of History

“The border has always been a place upon which the United States has projected its fears, often at great cost to the people who live here. Much like the time recounted by Martinez, we are in a period of change in every area of life. Politicians have seized upon fears of change to lie about the border, demonize immigrants, and win elections. The history recovered in this book, which sheds light on the consequences of such rhetoric, is an important contribution to the truth.”—José Rodríguez, Texas State Senator

“A masterful and sensitive work that reveals the ways in which ethnic Mexicans in Texas have dealt with the trauma of state-sanctioned police violence, mourned the loss of loved ones in their communities, and memorialized the victims by creating multigenerational records that counter state narratives.”—Neil Foley, author of Mexicans in the Making of America

“This compelling book about survival and reckoning examines the efforts of communities in the U.S.–Mexico borderlands to wrestle with the meaning of painful episodes of violence. A graceful writer and talented storyteller, Martinez shows the families’ determination to recover these histories and heal wounds that have lasted for generations.”—Geraldo Cadava, author of Standing on Common Ground: The Making of a Sunbelt Borderland

“Through impeccable archival work and a rich trove of oral history and other testimony, Martinez excavates the record of anti-Mexican violence along the U.S.–Mexico border in Texas. The Injustice Never Leaves You is also an indispensable study of the subtler violence along the border of memory and forgetting. A brilliant, important book on the specificities of border history but also on the very nature of ‘history’ itself.”—Matthew Frye Jacobson, author of The Historian’s Eye: Meditations on Photography, History, and the American Present