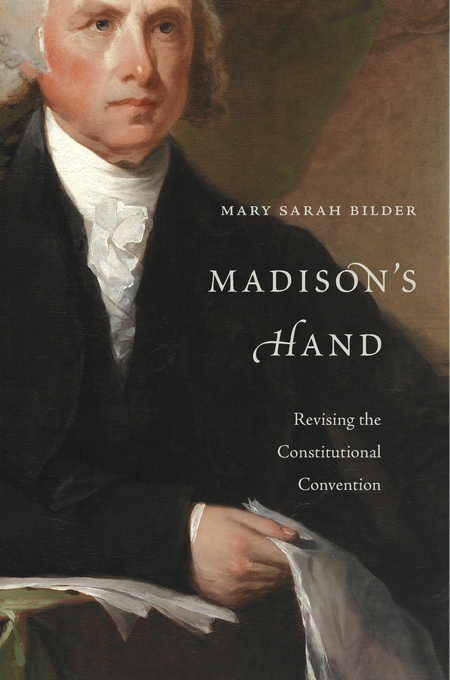 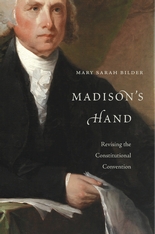 “[A] superb study of the Constitutional Convention as selectively reflected in Madison’s voluminous notes on it… Scholars have been aware that Madison made revisions in the Notes but have not intensively explored them. Bilder has looked closely indeed at the Notes and at his revisions, and the result is this lucid, subtle book. It will be impossible to view Madison’s role at the convention and read his Notes in the same uncomplicated way again… An accessible and brilliant rethinking of a crucial moment in American history.”—Robert K. Landers, Wall Street Journal

“A brilliant study of just how extensively Madison reshaped the story of what happened at Philadelphia over his long lifetime.”—Nicholas Guyatt, New York Review of Books

“The reliability of Madison’s Notes as a credible contemporaneous record of what really transpired in Philadelphia is being challenged as never before in an important new book… Bilder, using forensic techniques to date the changes [James Madison] made and historical research to describe what was happening politically when he made them, has made sense of the revisions, which began right after the convention and continued up until his death. And many of them amount to what we would now call ‘spin.’”—Fred Barbash, Washington Post

“The great value of Bilder’s project emerges not from its specific conclusions but rather from her interpretative methodology, and how she applies it to illuminate Madison, his Notes, and the Constitution’s creation. Her intricate, complex book is as clear as a careful scholar and writer can make it, and her clarity is particularly valuable in her explication of methodological issues… Bilder reminds us that Madison and his colleagues were creating a constitution for a specific polity at a specific time and place… Future scholars may produce readings of the Notes and of their evolution differing from Bilder’s, as she concedes in her introduction—in fact, she invites such work. Anyone following in Bilder’s footsteps will have to engage with her revolutionary book, as all of us who study the Constitution’s origins and the Federal Convention must do.”—R. B. Bernstein, New England Quarterly

“[Bilder’s] is a special kind of intellectual biography, concerned with the intimate processes by which Madison formed and reformed his ideas.”—Tom Cutterham, Reviews in American History

“In this groundbreaking work, Bilder advances our understanding of the Constitutional Convention and the evolution of James Madison’s Notes.”—H. L. Cheek, Jr., Choice

“Every historian who has ever written about the Constitutional Convention has used James Madison’s ‘Notes’ as a fundamental primary source. And although nearly all are aware of the fact that Madison revised his notes over time, no one has ever attempted a systematic study of the nature of those revisions or of the significant ways in which those changes might have altered our understanding of the Convention. Madison’s Hand is an exceptionally important piece of work that will have a profound impact on all future work on the Constitutional Convention.”—Richard Beeman, author of Our Lives, Our Fortunes and Our Sacred Honor

“For nearly two centuries, Madison’s ‘Notes’ have been regarded as secular scripture: an inerrant, authoritative, and complete account of the drafting of the Constitution. Bilder reveals them instead as an intricate palimpsest, altered and expanded repeatedly between 1787 and Madison’s death in 1836—with each change subtly reflecting the passions of the day rather than a quest for ‘original understanding.’ What emerges from this important book is a more human Madison, a more complex framing story, a new light on the struggles of the early Republic, and a deeper regard for the complexities and fascinations of American constitutional history.”—Garrett Epps, author of American Epic: Reading the U.S. Constitution

“In this eye-opening book, Bilder employs advanced research techniques to revise and correct our understanding of the written record of the Constitutional Convention. Along the way, she offers original and sometimes surprising new interpretations of many of the events and controversies that gave rise to our Constitution. Anyone who wants to understand the Constitution must take this book into account.”—Michael McConnell, coauthor of The Constitution of the United States

“Bilder has written the definitive study of one of the most influential texts in American constitutional history. She demonstrates that Madison’s notes on the Philadelphia Convention were never intended to preserve an impartial transcript of debates for posterity. They were designed, rather, to serve the various purposes of their author, which changed dramatically over the decades. The text assumed its final form only when a much older Madison felt it necessary to project the ideological allegiances of Jeffersonian Republicanism backward onto the Convention. We will never read this seminal document the same way again.”—Eric Nelson, author of The Royalist Revolution

“A major contribution to our understanding of the Constitutional Convention.”—Jack N. Rakove, author of The Annotated U.S. Constitution and Declaration of Independence