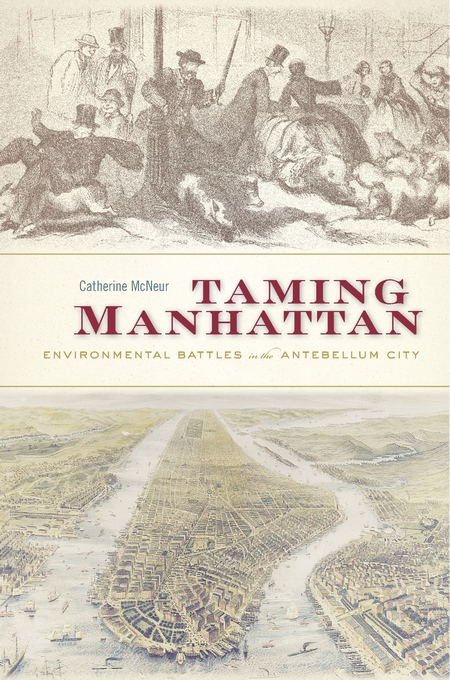 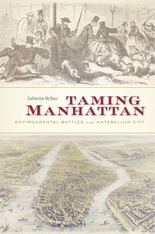 Environmental Battles in the Antebellum City

With pigs roaming the streets and cows foraging in the Battery, antebellum Manhattan would have been unrecognizable to inhabitants of today’s sprawling metropolis. Fruits and vegetables came from small market gardens in the city, and manure piled high on streets and docks was gold to nearby farmers. But as Catherine McNeur reveals in this environmental history of Gotham, a battle to control the boundaries between city and country was already being waged, and the winners would take dramatic steps to outlaw New York’s wild side.

Between 1815 and 1865, as city blocks encroached on farmland and undeveloped space to accommodate an exploding population, prosperous New Yorkers and their poorer neighbors developed very different ideas about what the city environment should contain. With Manhattan’s image, health, and property values on their minds, the upper classes fought to eliminate urban agriculture and livestock, upgrade sanitation, build new neighborhoods, demolish shantytowns, create parks, and generally improve the sights and smells of city living. Poor New Yorkers, especially immigrants, resisted many of these changes, which threatened their way of life.

By the time the Civil War erupted, bourgeois reform appeared to be succeeding. City government promised to regulate what seemed most ungovernable about urban habitation: the scourge of epidemics and fires, unending filth, and deepening poverty. Yet in privileging the priorities of well-heeled New Yorkers, Manhattan was tamed at the cost of amplifying environmental and economic disparities, as the Draft Riots of 1863 would soon demonstrate.