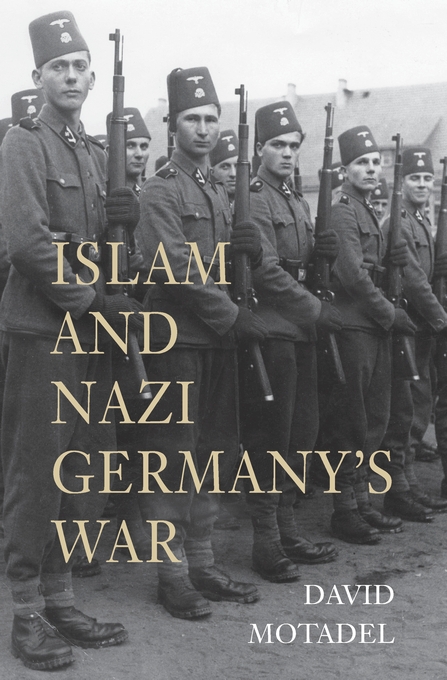 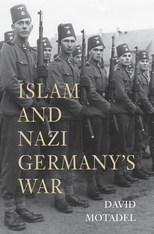 “Motadel describes the Mufti’s Nazi dealings vividly, but he also excels in unearthing other odious and fascinating characters… Impeccably researched and clearly written, [his] book will transform our understanding of the Nazi policies that were, Motadel writes, some ‘of the most vigorous attempts to politicize and instrumentalize Islam in modern history.’”—Dominic Green, Wall Street Journal

“[A] comprehensive and discerning history… Refresh[es] our understanding of Nazi Germany’s involvement with the Middle East and the wider Muslim world… [Motadel] offers a portrait of continuity in the West’s strategies for mobilizing Islam in wartime or for using Islam for its geopolitical ends—a history, on the whole, of continual failure… [A] sophisticated narrative.”—Steve Coll, New York Review of Books

“Islam and Nazi Germany’s War is the first book to provide an in-depth study of this complex relationship, charting its twists and turns as Hitler’s paladins sought to bring Muslims onside. It is academically impeccable, drawing on a wealth of archival resources in a multitude of languages, yet it wears its erudition lightly. In the current climate, a subject such as this might be considered controversial. Motadel, however, is never less than resolutely serious and rigorous. The whiff of sensationalism never offends the nostrils… Motadel’s book is a brilliantly original study that achieves that rare feat of combining rigor with accessibility. Most impressively, in the hugely crowded field of the second world war and Nazi Germany, it manages to explore an area of profound significance that had previously been overlooked.”—Roger Moorhouse, Financial Times

“Islam and Nazi Germany’s War is a valuable ground-breaking work, energetically readable and unabashedly complicated… Through an extensive amount of research in some fairly recondite primary sources, Motadel tells the story of Nazi Germany’s interaction with its Muslim conquests and would-be conquests in greater detail and with greater skill than any English-language historian before him. He stresses the at first odd-seeming fact that when it came to dealing with Muslims, the Nazis were almost jarringly accommodating… At heart, Motadel’s revelatory book describes a mutual bafflement, and in that sense alone it’s perhaps prescient. Either way, Islam and Nazi Germany’s War is an indispensable enlargement of our understanding of the Second World War’s Eastern European theater.”—Steve Donoghue, Open Letters Monthly

“Thanks to David Motadel’s exhaustive scholarship we now have the first ‘comprehensive study of German policy towards Islam during the Second World War.’ In fact, it is even more than that, since it explores the roots of Nazi policy in Imperial Germany and the Great War and follows its tracks through the Weimar years into the Third Reich.”—David Cesarani, Literary Review

“Hitler’s failed effort to put Muslim boots on the ground still stands as the most far-reaching Western attempt to use Islam to win a war. Such is the judgment of David Motadel, the author of a new, authoritative book, Islam and Nazi Germany’s War. Motadel’s detailed and fascinating explanation of how and why the Nazis failed to get Muslims on their side is a must-read for serious students of World War II, and it has an important message as well for our own policy in the Middle East.”—David Mikics, The Tablet

“In offering an interesting and important account of Islam in Nazism’s war, Motadel reveals a little-known chapter in the conflict. This is a nuanced and sensitive account of a topic that is too important to ignore.”—Robert Gellately, Times Higher Education

“Islam and Nazi Germany’s War by David Motadel…make[s] fascinating reading and highlight[s] the variety of ways in which the German state sought to subvert the Muslim soldiers’ professional loyalty to the Allied armies in the two wars… [Motadel] must be lauded for [his] painstaking research in producing [this] highly readable [volume] that include[s] relevant photographs as well.”—Muhammad Ali Siddiqi, Dawn

“There’s one Nazi propaganda battle you don’t hear much about. Now, Motadel details Hitler’s efforts to promote himself as a backer of Islam. The Nazis saw the Muslim people as sharing common enemies, including the British Empire and Zionism. ‘The peoples of Islam will always be closer to us than, for example, France,’ Hitler said. But despite the Third Reich’s best efforts, the Islam–Nazi relationship remained tempestuous. A new look at how World War II profoundly changed the Middle East.”—Billy Heller, New York Post

“Islam and Nazi Germany’s War by David Motadel is an important contribution to our understanding of the relationship of Nazi Germany to the Islamic world.”—Jack Fischel, Jewish Book World

“This is an important book with a different view of the world war, superbly researched, and elegantly produced.”—Arnold Krammer, Journal of Military History

“The importance of Motadel’s book is manifold… A strong work, providing anyone interested in the Nazi period and the role of Islam with a wealth of information and insight.”—Dmitry Shlapentokh, New Eastern Europe

“Motadel’s book provides a vast panorama of the Third Reich’s Islampolitik and clearly presents various aspects of this policy and various questions that it raises. Motadel loves details, and the book sometimes reads like historical anthropology… More generally, this book is virtually exhaustive in its approach, and would therefore be hard to surpass… Motadel uses an impressive number of sources, including diverse secondary sources and archives.”—Xavier Bougarel, Southeast European and Black Sea Studies

“Motadel is thorough, balanced in his judgments, and clear in exposition of the facts. Nazi attempts to instrumentalize Islam in the Arab world, the Caucasus, and the Balkans in order to foment rebellions in the empires of their enemies (Britain, USSR, and the U.S.) were unsuccessful. The recruitment of Muslim soldiers for the Wehrmacht and Waffen-SS proved more fruitful, but despite great expenditure of funds and personnel, the Germans never attained their unrealistic goals. Beginning his account with the failed attempts to mobilize Muslims in WW I, Motadel details the reasons for Nazi failures in WW II… An outstanding contribution.”—R. S. Levy, Choice

“David Motadel presents a deeply researched, finely written, and fascinating account of how the Nazis understood Islam and how they sought to mobilize, manipulate, and utilize it. There is no study quite like it, and it has much to teach not only to students of German history and Islamic studies, but also to those of international relations and geopolitics more broadly.”—Michael A. Reynolds, Princeton University

“An original contribution to the modern history of Islam, David Motadel’s book is a powerful and timely reminder of Western colonial efforts to manipulate and mobilize jihadist rhetoric in the service of empire.”—Robert D. Crews, Stanford University

“David Motadel shows that the Nazi regime pushed a crude but fairly consistent anti-Orientalist line in order to forge a Muslim alliance. This went beyond the coincidence of shared enmities against the British, the Bolsheviks and the Jews, and promised to open up a true partnership based on shared key values: obedience to the leader, belief in the family and commitment to a holy war. Mastering this complex story and showing it from radically contrasting points of view is a remarkable achievement.”—Nicholas Stargardt, University of Oxford

“Islam and Nazi Germany’s War will surely become one of the most important books on international history as well as global intellectual history, demonstrating the sophistication and theoretical rigor of both fields. It not only provides the most comprehensive account of Nazi Germany’s engagement with Islam but also fascinating insights into the nature of modern Europe’s complex relationship with Muslim societies. It will reorient the way we think about the geopolitics of European Orientalism and will be compulsory reading for everyone interested in debates on Islam and the ‘West.’”—Cemil Aydin, University of North Carolina at Chapel Hill

“David Motadel’s book is erudite, thorough, and elegantly written. It will be the reference on its subject for a long time to come.”—Saul Friedlander, University of California, Los Angeles

“Based on remarkable research, David Motadel has written an outstanding book on an important topic, providing fascinating and original insights into Nazism’s attempts to win followers of Islam to support of Germany’s war.”—Sir Ian Kershaw, University of Sheffield