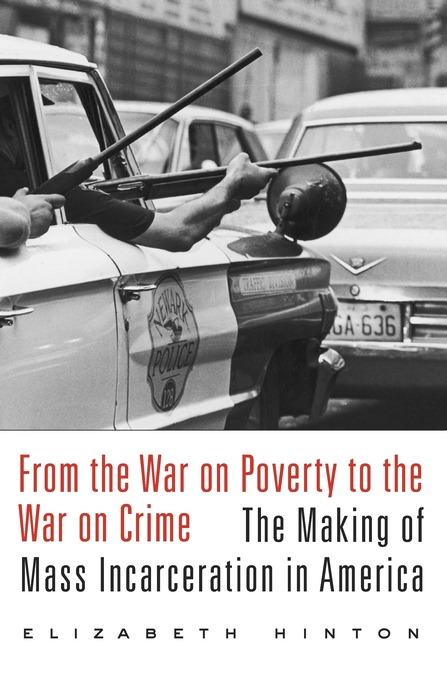 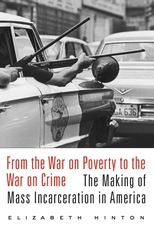 The Making of Mass Incarceration in America

“From the War on Poverty to the War on Crime requires slow and careful reading for anyone seeking to grasp the full implications of this exceedingly well-researched work… The book is vivid with detail and sharp analysis… Hinton’s book is more than an argument; it is a revelation… There are moments that will make your skin crawl… This is history, but the implications for today are striking. Readers will learn how the militarization of the police that we’ve witnessed in Ferguson and elsewhere had roots in the 1960s… A reader cannot help reckoning with the truth that the problem of police brutality and mass incarceration won’t be remedied with technology and training. Those of us who believe in the principles of democracy and justice would do well to witness, as detailed in Hinton’s pages, the shameful theft of liberty in this so-called land of the free.”—Imani Perry, New York Times Book Review

“Hinton’s careful excavation of the bipartisan federal drivers of mass incarceration is a significant contribution to the scholarly literature… Hinton challenges the prevailing understanding of mass incarceration’s roots… Hinton has written a work of history, but most readers will see its contemporary implications as clearly as she does. Having shown how federal policy helped drive up the number of people incarcerated by or under the supervision of the criminal-justice system, she enables us to imagine how it might help bring the numbers down.”—James Forman, Jr., The Nation

“At a moment when policing’s impact on African Americans and mass incarceration have again become topic of national conversation, Hinton’s book is significant for its reminder that both liberals and conservatives share the blame.”—Jeff Guo, Washington Post blog

“Rich with details and synthesis that give the reader fresh insights into how the well-meaning policies of the Kennedy and Johnson eras went awry.”—Priyanka Kumar, Los Angeles Review of Books

“Hinton’s well-researched book is filled with historical anecdotes painting a colorful picture of the nation’s persistent struggle with crime since President Johnson coined the phrase ‘War on Crime’ more than fifty years ago… From the War on Poverty to the War on Crime is smart, engaging, and well-argued.”—Lauren-Brooke Eisen, National Review

“Elizabeth Hinton’s richly researched new book barrels toward one chilling conclusion: beginning as early as the Johnson administration, federal authorities—regardless of political affiliation—systematically constructed a criminal justice regime that targets, criminalizes, polices, and imprisons staggering numbers of young black men, especially in urban areas… Hinton’s documentation is thorough and compelling. As the chapters unfold, she makes clear that, between the late 1960s and early 1980s, the federal government slowly built a trap, creating the conditions for the mass incarceration of black youth with which are now so familiar… Hinton’s book is a revelation and a must-read for the depths of evidence it marshals to document the persistent and active role the federal government plays in the rise of mass incarceration… It is a story that anyone concerned about how mass incarceration developed and how we might end it must read.”—Kelly Lytle Hernández, Boston Review

“A clear-eyed and timely book, it traces the country’s cannibalistic prison industrial complex back to the social welfare programs created by Lyndon Johnson’s War on Poverty. This history is heartbreaking, but it is one that affects an enormous percentage of the country… Read it and vote—especially for the state legislators, judges, and district attorneys who exert the greatest influence over the system.”—Molly McArdle, Brooklyn Magazine

“Hinton demonstrates that from the beginning the Kennedy-Johnson War on Poverty was a battleground of ideas and policies between mostly grassroots struggles to extend the benefits of the New Deal to communities of color, and top-down efforts to construct the foundations of the urban carceral state… Hinton’s cautionary tale is a must read for activists.”—Tony Platt, History News Network

“Hinton’s book constitutes the most comprehensive analysis of the historical roots of mass incarceration to date. Those wanting to deepen the understanding of this history that they may have gained from The New Jim Crow, the Golden Gulag and The First Civil Right would do well to seriously engage this wonderful work.”—James Kilgore, Truthout

“With more than 7 million Americans incarcerated or on parole or probation, leading to scholarly analysis and journalistic accounts of mass incarceration, and another 43 million living below the established poverty guidelines, Hinton’s book is timely indeed… The nuanced analysis moves the research in criminology and poverty to heights not reached by others. This readable text is a must read for anyone working in these fields of research.”—E. Smith, Choice

“Readers will appreciate Hinton’s archival deep dive into the various and successive congressional acts responsible, sometimes unwittingly, sometimes not, for what amounts in her terms to criminalizing poverty. She discusses the prevailing social science theories that informed those laws…and frequently cites official reports and informal intergovernmental communications that expose the policymakers’ thinking. General readers will be appalled at her portrayal of outrageous police practices.”—Kirkus Reviews

“The United States now locks up more of its citizens than any other nation on earth, and racial and economic disparities within the prison population are deeply troubling. The incarceration rate of young black men who do not finish high school is nearly 50 times the national average. How did we get here? Hinton’s From the War on Poverty to the War on Crime brilliantly addresses the question of mass incarceration in vivid detail and with moral conviction… Hinton’s book is the definitive history of America’s tragic and ultimately failed experiment with mass incarceration.”—Matthew Desmond, Publishers Weekly

“An outstanding book—clear, compelling, and essential. Hinton excavates the deep roots of police militarization, surveillance of minority communities, and the punitive shift in urban policy. Her argument that liberals were key architects of the war on crime is a necessary and even urgent corrective to conventional thinking about mass incarceration.”—Matthew Lassiter, author of The Silent Majority: Suburban Politics in the Sunbelt South

“A superb work that is a major and timely contribution to the history of mass incarceration. It powerfully resets and sharpens the debate among scholars on the interaction of federal and state dynamics in shaping the modern carceral state.”—Jonathan Simon, author of Mass Incarceration on Trial: A Remarkable Court Decision and the Future of Prisons in America