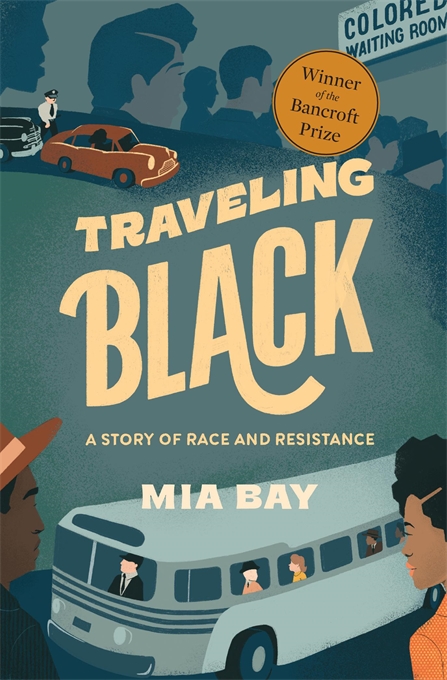 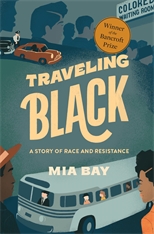 “In Traveling Black, Mia Bay’s superb history of mobility and resistance, the question of literal movement becomes a way to understand the civil rights movement writ large… Bay…is an elegant storyteller, laying out the stark stakes at every turn while also showing how discrimination wasn’t just a matter of crushing predictability but often, and more insidiously, a haphazard jumble of risks… Her excellent book deepens our understanding of not just where we are but how we got here.”—Jennifer Szalai, New York Times

“American identity is inextricably linked to freedom of movement. But for much of the nation’s history, black Americans have been barred from fully enjoying this freedom… Based on firsthand accounts and comprehensive archival research, Traveling Black details the manifest ways in which black Americans responded to limitations on their mobility.”—Smithsonian

“Meticulously examines how, with the arrival of each successive form of transportation technology—from those stagecoaches and trains to cars to buses to planes—there was hope on the part of African Americans (and their allies) that the invention would result in a fairer and more equitable system. But each time, white supremacy found its way into the new sphere.”—Brett Berk, Car and Driver

“Bay gives us an insightful history of travel segregation for Black people from the late 19th century to the 1960s… You’ll come away from Bay’s book with the realization that for every Rosa Parks…there were countless and unknown Black men and women in segregated America who lived and traveled with determination, resistance, and dignity.”—Fodor’s Travel

“Takes readers on a journey through the history of segregated travel to travel issues faced by contemporary African Americans… Bay provides a detailed historical account of the experiences of African American travelers… A [deep] examination of the history of legal changes pertaining to segregation in transportation.”—Maggie E. C. Jones, Technology and Culture

“A deep dive into the history of Black resistance to travel segregation… Bay offers a wealth of detail, reminding readers that for every Rosa Parks there are thousands of less famous people engaged in the same struggle, all worthy of having their stories told.”—Christian Century

“Fantastic…both a richly detailed history of travel and transportation from the late nineteenth century to the 1960s that centers the experiences of Black travelers, and a deeply researched history of resistance to discrimination that brings to light those travelers’ active and ongoing efforts to demand equal treatment… Bay urges us to rethink our histories of this era in order to acknowledge a much longer and more extensive pattern of resistance than previously known.”—Joanna Grisinger, Jotwell

“Important and disturbing… Filled with vivid first-person accounts, Traveling Black is a superb history that captures a shameful aspect of the American story.”—Joseph Barbato, New York Journal of Books

“A powerful collection of essays exploring what it means to travel globally as a Black woman.”—Anne MaiYee Jansen, Book Riot

“Disturbing and absorbing… From stagecoaches to iron horses to Cadillacs to the unfriendly skies, Black people in the U.S. have never been truly free to traverse the open road… Bay elevates the importance of the Black right to mobility in the struggle for civil rights. Not simply a record of oppression, the book also illuminates the determined spirit that underpins the fight for Black equality across the country, exploring the methods that Black people have used to subvert a racist system that persists today… A book that shocks, shames, and enlightens.”—Kirkus Reviews (starred review)

“Mia Bay is one of America’s foremost intellectual and social historians, and her deft treatment of the personal indignities and structural inequities that beset African American travelers rearranges our understanding of the racial dimensions of one of our country’s most sacred rights—the right of free movement. In Bay’s telling, Black travelers emerge as innovators and early adopters of new transportation technologies, out of both social necessity and a dogged commitment to resisting every limit placed on their right to self-determination. She reminds us, as the best historians always do, that for African Americans you cannot understand the destination without sustained attention to the journey.”—Brittney Cooper, author of Eloquent Rage

“This extraordinary book is a powerful addition to the history of travel segregation. Traveling Black reveals how travel discrimination transformed over time from segregated trains to buses and Uber rides. Mia Bay shows that Black mobility has always been a struggle.”—Ibram X. Kendi, author of How to Be an Antiracist

“One of the supposed hallmarks of a free democratic society is the ability to travel without restriction. That has not been the case for Black Americans. From slavery through Jim Crow and beyond they faced a plethora of rules, formal and informal, that made travel a daunting enterprise. Mia Bay is one of the outstanding historians of her generation, and she asks crucial questions: Why were so many of the early challenges to segregated travel brought by women? Why was travel by train and bus such a problem for the racial hierarchy, particularly in the South, and why did it become such a focal point of resistance? Timely and well written, Traveling Black offers a powerful new vision of the long arc of protest against racial segregation in America.”—Annette Gordon-Reed, author of The Hemingses of Monticello

“In America, freedom so often is ‘just another word for’ the right to go where we want to go. Yet as Mia Bay reveals in her dynamic history, African Americans have rarely enjoyed this right without the strings—or stings—of discrimination, whether by law or custom, intimidation, or outright violence. At the core of her story is the struggle over human dignity itself. Bay takes us on a journey from the caprices of the early color line in the antebellum North to the harrowing experiences of ‘driving while Black’ today. Bay shows that the civil rights movement has much deeper roots than many imagine and its movements have long tracked the battle for safe and equal access to the rights of passage. Traveling Black is well worth the fare. Indeed, it is certain to become the new standard on this important, and too often forgotten, history.”—Henry Louis Gates, Jr., author of Stony the Road

“Traveling Black is a stunning achievement that promises to transform our understanding of the character and importance of segregated travel. Based on prodigious research, its richly textured and insightful narrative takes us on a fascinating and eye-opening journey of discovery along the roads and rails of Jim Crow America.”—Raymond Arsenault, author of Freedom Riders

“A comprehensive survey of the relationship between travel restrictions, racial segregation, and civil rights in America.”—Publishers Weekly