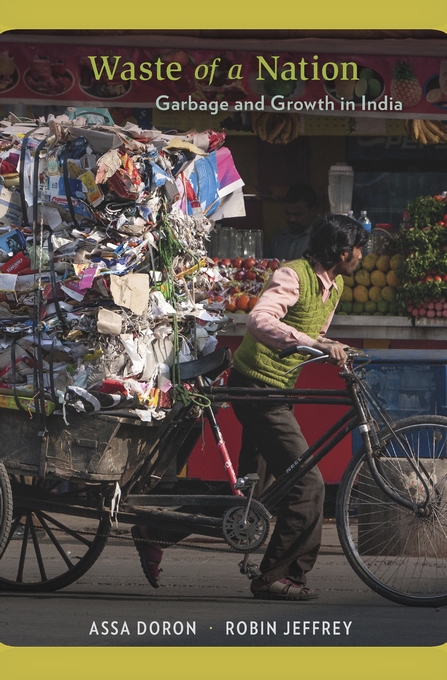 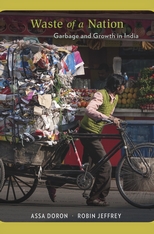 Waste of a Nation

Garbage and Growth in India

“An in-depth investigation of India’s feeble fight against mountains of consumerist waste [with] robust statistics, compelling history, and telling case studies… The result is both beguiling and disturbing… The authors reveal the complex cultural, social, political and religious hurdles that hamper the country’s struggle with waste.”—Subhra Priyadarshini, Nature

“Waste of a Nation is an elegant and forceful examination of this underside of Indian life, hiding in plain sight on every street. It mixes slices of city life with analysis of both the cultural background behind India’s obsession with recycling and its potential role in greening a country that’s urbanizing and industrializing probably faster than anywhere else on Earth.”—Fred Pearce, New Scientist

“Doron and Jeffrey are admirably thorough…but also alive to a good story… The ordinary waste of residents of Indian metropolises has ballooned to levels that are essentially unmanageable, with the result that landfills are overflowing, sometimes even combusting, and liquid sewage is pumped into rivers and the sea. It is a horrifying situation.”—Anjali Joseph, The Times Literary Supplement

“A 360-degree look at waste, from production to disposal to reuse, and all the intervening steps during this journey that intersect with caste, class, and technology… Doron and Jeffrey present a riveting account of contemporary life in India.”—Somak Ghoshal, Mint

“Assa Doron and Robin Jeffrey seek to capture not India’s increasing wealth but its rapidly growing waste—a largely neglected subject. Their travels take them through rivers overflowing with human ashes and industrial waste, sewers swirling with noxious gases, toilets topped with excrement-filled cesspits and teetering garbage landfills… They return with a stunning—and alarming—picture of a nation choking on its own garbage… Their travels through India’s wastelands surprise, engage and inform readers.”—Saumya Roy, The Wire

“Should be applauded for provoking a wider discussion of such issues that have so far been the domain of ‘subject experts.’ If it helps us unravel the tangled threads of webs of waste that we generate and yet hate, Assa Doron and Robin Jeffrey will have done us a valuable service.”—Amita Baviskar, Biblio

“It reads like a thinking person’s travelogue through urban India. This is also its strength…it takes the reader back to the reality of a complex, messy world of waste, an important armour against today’s silver-bullet projects.”—Bharati Chaturvedi, India Today

“This comprehensive study of waste—wet and dry, human and nonhuman—posits caste in a central role but is equally interested in tracing the impact of the nation’s colonial past.”—Stacey Balkan, Public Books

“[Doron and Jeffrey’s] comprehensive study analyses the history and evolution of India’s waste crisis and looks at the ways authorities have tried (and often failed) to address the issue, even as millions of poor, informal workers brave horrifying conditions to make a living within the waste economy.”—Maria Thomas, Quartz

“As Assa Doron and Robin Jeffrey argue in their timely and incisive book, Waste of a Nation: Garbage and Growth in India, tackling the country’s systemic sanitation and environmental problems will require much more than setting ambitious targets… They tackle their subject dispassionately and with the academic rigor necessary to untangle reams of statistics to get to the core of the challenges facing India’s 1.37 billion people. The book is also highly readable. The authors move seamlessly between the micro and macro levels, from following the lives of untouchable sewerage workers in Mumbai who daily risk their lives descending into manholes, to interviewing the Indian PM.”—John Zubrzycki, The Australian

“A most engaging document that lays bare the waste of India… The outstanding merit of the book is that it constantly draws our attention, in a holistic way, to the wider overall dimension of Indian waste in a contemplative way that mixes anecdotes, facts, observations and humor.”—Romi Khosla, The Wire

“Waste of a Nation confronts simplifications and myths about India’s complex culture and its environmental challenges. Doron and Jeffrey have written an ambitious book that provides a very good guide to how one of the world’s most populous nations handles waste in its many manifestations, as well as the all-too-human consequences.”—Martin V. Melosi, author of Garbage in the Cities: Refuse, Reform, and the Environment and The Sanitary City: Environmental Services in Urban America from Colonial Times to the Present

“This is a landmark publication providing a comprehensive look at various aspects of ‘waste’ in Indian society and history. I particularly admire the skill with which the authors combine historical, anecdotal, economic, ethnographic, and even technical details to provide an enjoyable read that is, at the same time, deeply instructive.”—Dipesh Chakrabarty, University of Chicago

“Through rigorous empirical analysis and an erudite narrative, Doron and Jeffrey have crafted an engaging commentary on India’s struggles with waste management. The authors judiciously argue that if we are to realize Mahatma Gandhi’s dream of a clean India, we need multifaceted reforms with an unwavering focus on people.”—Shashi Tharoor, Member of Parliament, India, and author of Inglorious Empire: What the British Did to India