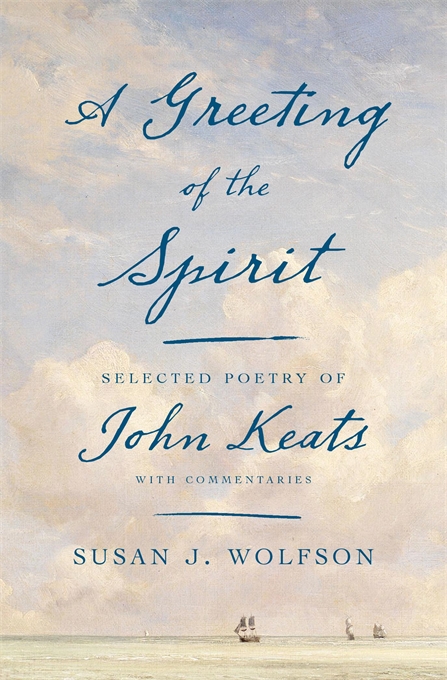 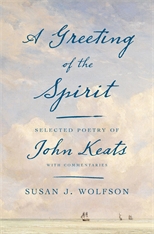 A Greeting of the Spirit

“Wolfson’s commentaries offer ‘tutorials’…in how to savour Keats’s poetry, arousing the sort of intense appetite that Keats felt for Homer. Each commentary is an immersion in language and effect, thickened by attention to a web of references… As a ‘series of close encounters’, A Greeting of the Spirit lends itself to browsing; the reader can drop in on her commentaries, skip and re-read them with pleasure.”—Christy Edwall, Times Literary Supplement

“A generous, expertly chosen selection of Keats’s greatest poems, accompanied by commentaries which are learned and lithe, brilliantly perceptive, extraordinarily informative, and infectiously full of delight. Really, you could not imagine a better companion to guide you through these endlessly marvelous poems.”—Seamus Perry, editor of Coleridge’s Notebooks

“Wolfson’s is the book on Keats: a stirring feat of participatory stylistic insight and creative empathy. The rare idiomatic flair of her prose brings back Keats, man and craftsman, in his historical and mortal moment, tracked through impeccably re-estimated verses. With no stone left unturned, even settled gems are rubbed more brilliant by context. Metaphor, metrics, textual history, notes in Keats’s margins and letters, his inexhaustible word play, his philosophical ruminations on the horizons of poetry: all the varied facets of genius and aspiration are seen together in their glinting refraction as never before.”—Garrett Stewart, author of The Ways of the Word

“A fine selection of Keats’s work, richly analyzed and contextualized by a scholar whose formal attention to detail brings poetry to life on the page. Wolfson guides the reader step by step through both the best-loved and least-known of Keats’s poems, in an anthology that also becomes an enjoyable and thought-provoking tutorial.”—Angela Leighton, author of Hearing Things: The Work of Sound in Literature

“Susan Wolfson’s A Greeting of the Spirit generously tracks Keats’s ‘experiments with words,’ exercising the depth and breadth of her expertise to make his verses newly available to readers. Her commentaries, fresh and incisive, invite us to participate in the poet’s heady way of concentrating the resources of language.”—Frances Ferguson, author of Solitude and the Sublime

“Susan Wolfson offers a series of superb commentaries on Keats’s poems, opening up the verbal energies, complexities, peculiarities, and imaginative capacities of his writing. This book is an invitation for us all to read and reread Keats, accompanied by one of his most brilliant modern critics, who reveals him as a poet for everyone ready to be enchanted by genius.”—Nicholas Roe, author of John Keats: A New Life