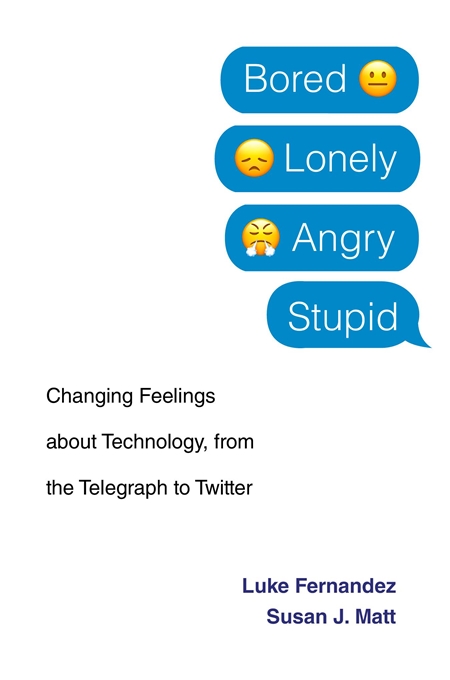 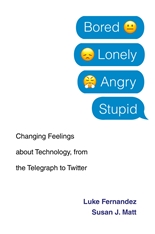 Changing Feelings about Technology, from the Telegraph to Twitter

“Online immersion can distort emotion… Marshalling archival sources and interviews, [Fernandez and Matt] trace how norms (say, around loneliness) have shifted with technological change. Broadcasting deregulation under President Ronald Reagan, for instance, made room for anger-inducing right-wing ‘talk radio.’ Yet, as they show, the digital world lifts even more limits, stimulating and affirming a range of negative emotions.”—Barbara Kiser, Nature

“A scholarly attempt to track changes in social norms and in human emotions occasioned by advances in technology across a couple of centuries, but it concludes that our twenty-first-century situation is different from those earlier shifts both in the rate of change and in the problems introduced by cybertechnologies… Narcissus had to find a pool to gaze into; we just pull out our phones.”—Gavin Francis, New York Review of Books

“This is a thoughtfully nuanced take on the kind of ‘is technology killing us dead’ alarmist tracts that have proliferated as ‘smart’ devices have proliferated, an effect largely achieved by grounding the whole question deeper in history. The social reactions to the telegraph, the home radio, the television, and, crucially, a country-crossing modern highway system, all interestingly foreground many of the modern reactions to further inroads made into our private lives by technology on every side.”—Steve Donoghue, Open Letters Review

“We take some things for granted today—that selfies make us narcissistic, that social media can make us lonely, and so on. This book adds much-needed historical perspective to these knee-jerk fears, by examining how our emotions have been expressed over time, and how they’ve been impacted by new technologies along the way.”—Jason Feifer, Entrepreneur

“A valuable addition to the study of social behavior influenced by technologies. The authors have worked hard in aggregating thousands of small pieces of evidence scattered in diverse historical and modern sources to build an illuminating context in which we can begin to fathom our emotional states entangled with technologies.”—New York Journal of Books

“Impressive… A well-articulated and nuanced analysis of the overlooked symbiosis between the cultural history of emotions and technological developments.”—Alina Ivan, The Psychologist

“An important contribution to understanding the digital present by showing the historicity and cultural construction of contemporary (digital) emotions—while incorporating the interplay of technology and emotions… As a contribution to the current debate on digital transformation, their book is definitely a worthwhile read.”—Martina Hessler, Technology and Culture

“A powerful story of how new forms of technology are continually integrated into the human experience. A particularly fascinating chapter outlines the history of anger in American society, from a trait to be publicly suppressed…to something which social media has transformed into ‘a right of all’… Anyone interested in seeing the digital age through a new perspective should be pleased with this rich account.”—Publishers Weekly

“Bored, Lonely, Angry, Stupid is a crisp and compelling read. The authors make extensive use of on-the-ground human perspectives, from both the historical record and personal interviews, lending the book a verisimilitude that is exceedingly rare.”—William Powers, author of Hamlet’s BlackBerry: Building a Good Life in the Digital Age

“The time is certainly ripe for a book like this. The premise is remarkably simple: track the ways in which emotions have changed over time in relation to new waves of communication technology. Using reflective storytelling built on historical research and contemporary data, the authors show us just how singular our own moment in time is.”—Rob Boddice, Free University, Berlin

“In this wonderful book we learn that new ideas are often just repeats from the past, and we may get more than we bargained for with our latest technological engagements. Bored, Lonely, Angry, Stupid is a must-read for anyone worried about how today’s surfeit of digital devices may challenge our humanity, and wondering if, given the emotional costs, we might choose another way.”—Safiya Umoja Noble, author of Algorithms of Oppression