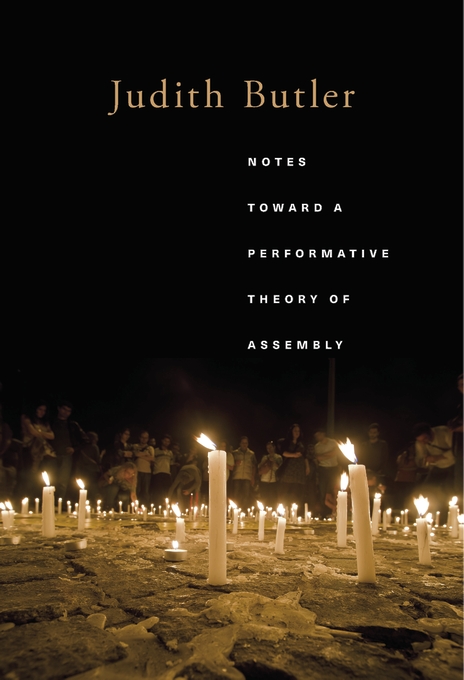 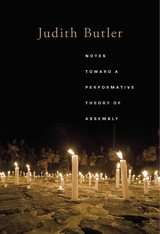 Notes Toward a Performative Theory of Assembly

“[An] intellectual enquiry of public assembly politics… The book questions the role and aspects of public assembly, performative space and the performing body… While Notes Toward A Performative Theory of Assembly posits and comments upon a range of substantial material in a relatively compact space, the writing and ideas are far from impenetrable; rather, Butler writes in an uncomplicated manner about significant ideas. The book should be read by anyone interested in political science, human rights, social activism, critical theory, gender studies, socio-legal studies and philosophy, as well as those who themselves are part of contemporary movements.”—Alexis Bushnell, LSE Review of Books

“Butler’s book is everything that a book about our planet in the 21st century should be. It does not turn its back on the circumstances of the material world or give any succour to those who wish to view the present (and the future) through the lens of fantasies about the transformative possibilities offered by conventional politics… Butler demonstrates a clear engagement with an aspect of the world that is becoming in many political contexts almost illicit to discuss: the idea that capitalism, certainly in its neoliberal form, is failing to provide a liveable life for the majority of human beings. The rhetorical question that Butler asks at the conclusion to her introduction—of how we might act together when we live in worlds in which so many forms of solidarity are diminishing—is a central question for politics throughout the world.”—Mary Evans, Times Higher Education

“Conceptually rich… Writing in response to the powerful wave of mass movements whose defining characteristic often involves people sitting or standing in the same place—Gezi Park, Tahrir Square, Occupy, etc.—Butler argues that freedom of assembly is an inextricable part of freedom of expression. And freedom of assembly is coming under increasing assault, in part because the very spaces in which people are assembling to voice their protest (which is often simply the demand for a decent life) are the ones under threat from capitalist regimes bent on privatizing public space, public goods and services, and on the violent enactment and enforcement of the private sphere… Like all of Butler’s works, Notes Toward a Performative Theory of Assembly is a heady immersion into the thought of one of today’s most profound philosophers of action… This is a call for a truly transformative politics, and its relevance to the fraught struggles taking place in today’s streets and public spaces around the world cannot be denied. For those seeking a way to reconcile the waves of refugees, the alternating violence and silence of the streets, and the democratic ideals many of us have been raised to hold, Butler offers if not a way then the beginnings of a coherent way to think about it.”—Hans Rollman, PopMatters

“A work that stands out as perhaps Butler’s most concerted attempt to make sense of constructive human agency… Notes Toward a Performative Theory of Assembly is nonetheless Butler’s most lucid and successful attempt to show that her views need not lead to ‘quietism and retreat,’ and that they have always contained the seeds of a rich and important, positive contribution to political thought. Unlike some of her earlier works, this book is genuinely accessible to the intelligent student of political life who is not steeped in the abstruse and difficult claims of contemporary literary theory and cultural studies… Ultimately, Butler’s project in Notes Toward a Performative Theory is valuable not only for its potential to rehabilitate humanism, but also for the clarity with which it requires the reader to recognize the political importance of contemporary media—perhaps especially social media—for the ways they have altered ethical and political domains.”—Michele M. Moody-Adams, Women’s Review of Books

“One of the boldest and most radical thinkers of our time, Butler examines the contemporary state of popular sovereignty, resistance, and other ‘concerted actions,’ as Hannah Arendt termed them, of political engagement in this series of essays expanding on her theory of performativity. Looking at recent mass protests, including events in Tahrir Square and the various Occupy movements, she explores what freedom of assembly entails in different spaces—public, private, confined, and virtual—while focusing on how individuals can take actual, not simply rhetorical, political action… Butler’s examination of popular sovereignty and public assembly is incisive and exigent.”—Publishers Weekly

“Judith Butler has written a vital, timely, and moving book that shines new light on the collective dimension of dissent. Instead of upholding the false division between thought and action, she recognizes that radical ideas are necessarily embodied. All over the world people are rising up and saying no to police violence, racial and gender discrimination, ecological devastation, austerity, and precarity. This powerful book is for anyone who has ever assembled with others to demand a more just and equal future.”—Astra Taylor, author of The People’s Platform: Taking Back Power and Culture in the Digital Age

“In effect, Butler has written a manifesto against the privatization and individuation of political cultures. Butler’s elegant and detailed philosophical reflections engage seriously and deeply with the writing of Arendt and some of the debates around humanity and social and political ontology that her work has generated. This is a profound and brief but very ambitious book. It is challenging but not dense, as lucid as it is timely.”—Paul Gilroy, author of Darker than Blue: On the Moral Economies of Black Atlantic Culture

“Judith Butler wonderfully analyzes the power and promise of assembly, particularly the assembly of precarious populations, and in doing so offers a lucid and exciting analysis of contemporary forms of activism. This is a thinker at the height of her intellectual powers.”—Michael Hardt, co-author of Commonwealth