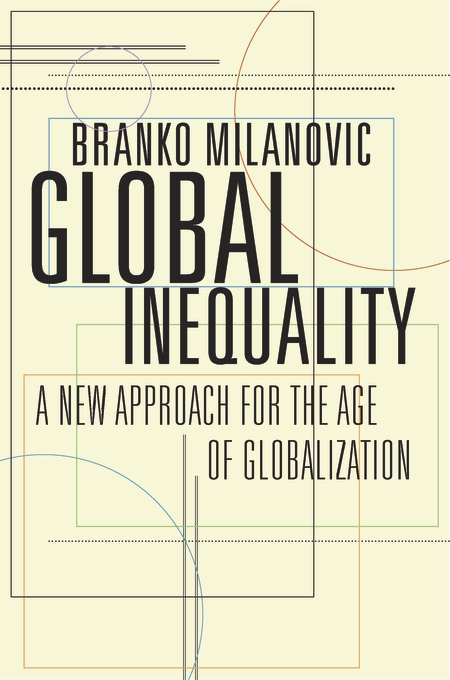 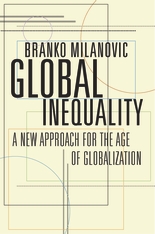 A New Approach for the Age of Globalization

“Branko Milanović’s much underestimated Global Inequality: A New Approach for the Age of Globalization, now being published in many languages, tells us more than any other recent book about the state of the world we live in and, at a time when hope is so urgently needed, offers us thought-provoking insights into the world we could become.”—Gordon Brown, The Guardian

“This outstanding book adds significantly to recent works by Thomas Piketty, Anthony Atkinson and François Bourguignon. Milanovic concludes that inequality is rising within most countries, although global inequality, albeit huge, has been falling. Unfortunately, he sees no end to the current upswing in inequality in the high-income countries. That creates disturbing political dangers.”—Martin Wolf, Financial Times [12/02/16]

“The data [Milanovic] provides offer a clearer picture of great economic puzzles, and his bold theorizing chips away at tired economic orthodoxies.”—The Economist

“Hard-hitting… Global Inequality reveals that the main losers of the past three decades of globalization have been the western middle classes. No wonder then that politics is turning so populist and pear-shaped in so many countries. In fact, Milanovic quite persuasively puts inequality worldwide at the heart of a wide range of ills, as threatening our economies and threatening our long-cherished democracies too… Whether you agree with his politics or not, the statistical support for Milanovic’s story is as compelling as that garnered by Piketty [for Capital in the Twenty-First Century] last year. He is persuasive that political concern about rising inequality is more than a passing fad, and that we need to think about narrowing the gaps, inside countries in particular, if we are going to avoid very ugly social and political developments worldwide.”—David Dodwell, The South China Morning Post

“Milanovic offers us not just a plethora of facts about income inequality that will surely make his readers think twice. More importantly, he shows us the power of bringing the facts into focus by putting a new lens over these pressing issues—a global perspective… If you do read it, your focus will be sharper, you will be able to see further, perhaps even globally, and your image of a whole host of public policy challenges will be clearer and much more nuanced.”—Miles Corak, The American Prospect

“[Milanovic] makes a case that the rapid growth of poorer countries since 1988 has brought the first decline in inequality since the Industrial Revolution… The very rich or the very corrupt may still hide their wealth in tax havens. Politicians in developed countries may decry rising inequality. But global trends and new data tell an alternative story about the progress already made to lift the poor.”—The Christian Science Monitor

“Branko Milanovic has written an outstanding book. Global Inequality: A New Approach for the Age of Globalization is informative, wide-ranging, scholarly, imaginative, and commendably brief. As you would expect from one of the world’s leading experts on this topic, Milanovic has added significantly to important recent works by Thomas Piketty, Anthony Atkinson, and François Bourguignon… Ever-rising inequality looks a highly unlikely combination with any genuine democracy. It is to the credit of Milanovic’s book that it brings out these dangers so clearly, along with the important global successes of the past few decades.”—Martin Wolf, Financial Times [04/14/16]

“Drawing on two centuries’ worth of household survey data, the book provides an important empirical picture of inequality patterns within and among nations… Milanovic’s marshaling and analysis of the data are an achievement in themselves. But I also appreciated his imaginative vision and probing sensibility, especially in the fascinating final chapter, in which he poses 10 big questions, offers predictions and proposals, and outlines a future filled with both possibility and peril.”—Jeff Kehoe, Harvard Business Review

“[Milanovic] brings an enormous scope of knowledge of recent and past income trends… The data assembled in the book are incredibly useful and will be eye-opening to most readers… There is an enormous amount of valuable material in a short book and he does raise a number of important basic moral questions that deserve careful thought. The book is well worth reading.”—Dean Baker, The Huffington Post

“Global Inequality: A New Approach for the Age of Globalization is a brilliant and thought-provoking essay stuffed with enough graphs to satisfy the numerati, anecdotes for the general reader and political insights for the policy wonks. Read it.”—Duncan Green, LSE Review of Books

“[Milanovic] brings fresh insights to one of today’s most talked-about issues, clearing up confusion on the way.”—Craig Calhoun, New Statesman

“Global Inequality goes well beyond the narrative of rising inequality captured by French economist Thomas Piketty’s surprise 2014 best-seller, Capital in the Twenty-First Century. In his highly readable account, Milanovic puts that development into the context of the centuries-long ebbs and flows of inequality driven by economic changes, such as the Industrial Revolution, as well epidemics, mass migrations, revolutions, wars and other political upheavals.”—Matt Phillips, Quartz

“From assessing inequality in the Byzantine Empire to musing over where people fall on the global distribution of income, Branko Milanovic has made a name for himself as an innovative thinker in this field. Even before Thomas Piketty made it cool, he was using Jane Austen vignettes to explore historical patterns of inequality. Milanovic’s new book does not disappoint.”—Anthony Annett, Finance and Development

“[Milanovic] believes that growing inequality within countries will not threaten capitalism as a system for allocating economic resources but will pose a serious threat to liberal democracy. As middle classes everywhere get squeezed, the United States will become even more plutocratic, and nativistic populism will become more mainstream in Europe—a process that is already under way, aided in no small part by the influx of migrants, a feature of globalization that is likely to only intensify.”—Richard N. Cooper, Foreign Affairs

“If there is one book you want to read to understand the tumultuous events of 2016, it has to be Branko Milanovic’s Global Inequality: A New Approach for the Age of Globalization. Using clear prose and armed with tons of data, Milanovic presents a fascinating tale of the rise and wane of global inequality to identify very precisely the winners and losers of globalization within and across countries. In doing so, he revisits some of the hoary assumptions about inequality in economics, and raises disturbing questions about the stability of democratic capitalism.”—Pramit Bhattacharya, Mint

“Excellent… Can help us better understand inequalities both between and within countries.”—Erik Berglöf, Project Syndicate

“Continuing with his extraordinarily important work on the empirics of global inequality, Branko Milanovic in this book expands on that work to lay the basis for a more theoretical understanding of the evolution of inequality. It is seen to be the product of two forces: Kuznets cycles of rising and decreasing within-nation inequalities, and convergence of mean incomes among countries. The relative strength of these two forces has profound political implications: Shall we live in the world of class cleavages, or of huge international income gaps? Is the world to be ruled by the global top 1 percent, or by a large global middle class?”—Joseph Stiglitz, Columbia University

“In Global Inequality, Branko Milanovic continues his lifelong investigation into the past, present, and future of inequality, within and between nations and in the world as a whole. Full of new and provocative ideas—including Kuznets waves and citizenship rents—the book will cement Milanovic’s reputation as one of the most thoughtful and enterprising of inequality scholars.”—Angus Deaton, Princeton University

“In this fascinating book, Milanovic is able to articulate the study of inequality between and within countries in the clearest possible way. A must-read.”—Thomas Piketty, Paris School of Economics

“This is a most unusual and stimulating book. It covers a remarkably broad sweep in time, and deals with issues that are central to the future evolution of humanity across the globe.”—Brian Nolan, University of Oxford

“This is an important book on an issue which has surprisingly been overlooked in the increasing debate on inequality: global inequality. A must-read.”—Ann Harrison, University of Pennsylvania

“Milanovic is one of the first scholars of contemporary income inequality who globalized its study, not just comparing the landscape of income distribution country by country, but integrating all our viewpoints into a global panorama. This book, his latest research and thinking on inequality, gives fresh ideas and insights in global historical perspective, on the profoundly important economic changes in all our lives. This is a book that truly deserves to be read, talked about, and proudly displayed on everyone’s bookshelf.”—Danny Quah, London School of Economics and Political Science