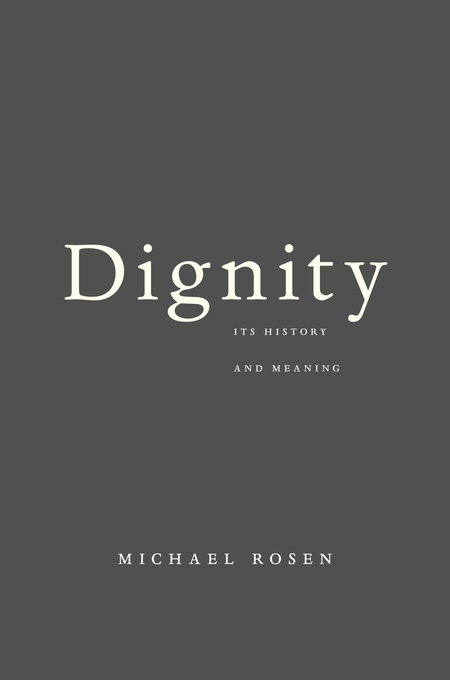 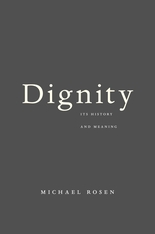 Its History and Meaning

“Penetrating and sprightly… Rosen rightly emphasizes the centrality of Catholicism in the modern history of human dignity. His command of the history is impressive… Rosen is a wonderful guide to the recent German constitutional thinking about human dignity… [Rosen] is in general an urbane and witty companion, achieving his aim of accessibly written philosophy.”—Samuel Moyn, The Nation

“Rosen has shown dignity has some kind of a serious moral role, whilst at the same time showing that it can’t justify as much as Catholics and Kantians want it to. It has a dramatic parasitical quality, so that it seems tangible and magnificent but also often foolhardy and empty. It is a value that appears powerful but often is less than it seems. Rosen’s brilliant book gives us dignity’s history and a cunningly disguised radical ending… Rosen’s narrative illuminates a subject that as he notes himself has eluded serious analysis for too long.”—Richard Marshall, 3:AM Magazine

“Dignity deserves to be widely read, not only for its intrinsic interest, but also as a corrective to the habit of discussing such topics in abstraction from their social context. Whether or not one agrees with Rosen’s arguments, there can be no doubt he has widened our horizons.”—Rae Langton, The Times Literary Supplement

“Stimulating and informative.”—Thomas Nagel, The New York Review of Books

“In Dignity: Its History and Meaning, Michael Rosen employs philosophy and political theory to unpack this contested term. He opens with a lively history of the concept, sketching its development from Cicero to Kant and beyond… This short, rich work ends with Rosen musing on dignity, duty, and respect: where we deny human dignity to others, we risk losing our own humanity.”—John Gallagher, The Guardian

“Dignity covers a vast historical and conceptual terrain in a remarkably short space. It is often insightful, sometimes brilliant, and unfailingly interesting. Philosophers and students of philosophy will read it with great profit, as will any thoughtful person.”—Stephen Darwall, Notre Dame Philosophical Reviews

“With this book Michael Rosen…adds a new voice to the defense of the concept of human dignity. Adapted from three lectures, his brief text has refreshingly accessible prose and a comfortable style, while at times giving very thorough accounts of complex ideas… The more general audience at which it is aimed will find Dignity engaging, challenging and stimulating… Rosen’s book is an important one.”—Charles Camosy, The Tablet

“[An] elegant, interesting and lucid exploration of the concept of dignity… Drawing on classical, liberal and Catholic traditions, Rosen hopes to rehabilitate dignity to its rightful place near the centre of moral thought… Rosen’s admirable book deserves wide attention from political theorists, jurisprudes and political philosophers.”—Simon Blackburn, Times Higher Education

“Beautifully written and argued… The concept of dignity is fundamental to many conventions on human rights, yet no one seems to have a firm idea of what it actually entails… One only need think of the different ideas of dignity employed in debates about euthanasia to see that the argument is far from resolved… Rosen does not claim to have resolved these conflicts but he does add something significant to the debate.”—Richard King, Weekend Australian

“Rosen’s prose is delightful in its clarity, concision, fair-mindedness, and occasional playfulness—no negligible feat for a slim volume that takes on a hefty portion of the intellectually gobsmacking Kant. And in its affable, yet rigorous intelligence, the book recollects Harry Frankfurt’s diminutive philosophical bestseller, On Bullshit… Perhaps the most winning aspect of Dignity is the case it makes in implicitly linking Kant and the philosophical history of dignity to contemporary legal cases, constitutions, and laws. Rosen contends quietly that philosophy still signifies in real ways in our world: shaping states, laws, and human attitudes. In an era when the study of the humanities is in decline, this is heartening stuff. More heartening still is Rosen’s interest in reaching an audience beyond philosophy professors. His easy, conversational style and pointed avoidance of jargon invite the educated lay reader into a culturally relevant and interesting conversation. This is the sort of work that humanities professors need to undertake if they want their disciplines to survive.”—Emily Wilkinson, The Weekly Standard

“Rosen’s lucid style and engaging examples make this book especially suitable for general readers and undergraduates; it engagingly conveys some of the most complicated issues of Kantian ethics in an accessible way. The book’s use of concrete legal cases shows the real-world implications of the philosophical debates… Rosen has given readers a well-written, highly accessible, and deeply insightful look at the sources and use of an important and much debated concept.”—A. W. Klink, Choice

“Rosen offers a thoughtful examination of the term’s multiple definitions and uses.”—Publishers Weekly

“A thought-provoking book which combines reflections on a rather old philosophical and a quite new legal concept of rapidly increasing interest in a particularly stimulating way.”—Dieter Grimm, Former Justice, Federal Constitutional Court of Germany, Humboldt University Berlin, and Yale Law School

“Dignity: Its History and Meaning has all the virtues readers of Michael Rosen have come to expect: argumentative lucidity, fair-mindedness, and clarity of expression. It opens up a world of interesting and timely questions.”—Martin Jay, University of California, Berkeley

“Michael Rosen takes us on an extraordinary journey through the tangled ethical, religious, and legal roots of the concept of dignity, showing its association with the distinct ideas of status, intrinsic value, bearing, and respect. This book is a one-off, exhibiting Rosen’s characteristic and unique blend of scholarly insight and analytic power, presented in superbly accessible style. It culminates in a persuasively authentic interpretation of Kant’s moral philosophy. Anyone wishing to understand the contemporary concept of dignity, or its history, must read this book.”—Jonathan Wolff, University College London