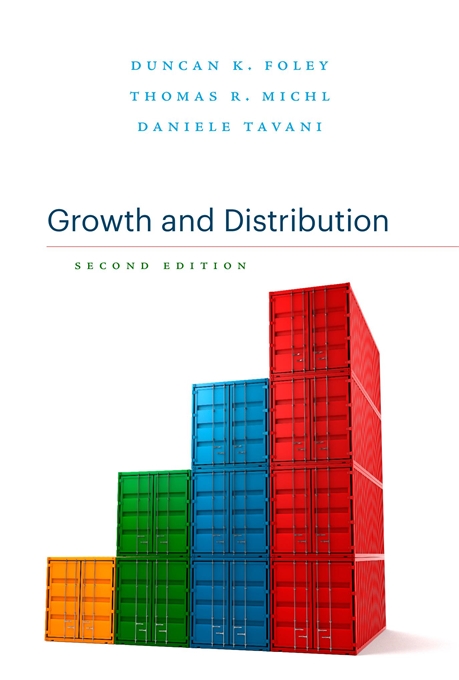 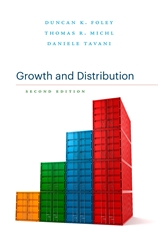 “The first edition of Growth and Distribution was wonderful—I refer back to it time and again. The second edition is even better, extending the analysis to demand-driven growth, wealth accumulation, and climate change. This is a book about growth theory that every serious economist of either mainstream or heterodox persuasion must read and master.”—Lance Taylor, Arnhold Professor Emeritus, The New School for Social Research

“Foley, Michl, and Tavani have put forth a bolder and more comprehensive second edition of their seminal textbook, Growth and Distribution. Partly as a response to new and deeper crises faced by capitalist economies across the world, this edition forges ahead of any other works on the topic by bringing the distribution of income and wealth as well as technical change to the forefront of growth analysis in contemporary economies. Analytical reasoning throughout the book remains grounded in the real world, allowing the students to grasp with ease complex challenges—such as rising inequality and global warming—that economies across the world will be confronting for decades to come.”—Codrina Rada, University of Utah

“Growth and Distribution offers an excellent introduction to the study of economic growth and income distribution in capitalist economies from a classical-Marxian perspective. The text is theoretically sophisticated, empirically informed, and institutionally grounded. The analytical framework developed in the first edition has been adapted and extended in the second, to address new challenges and concerns: rising income inequality, rampant financialization, and runaway climate change. This classic textbook is a must-read for all heterodox students and teachers of macroeconomics.”—Deepankar Basu, University of Massachusetts Amherst

“After years of preoccupation with inflation and unemployment, macroeconomists have turned their attention to growth… But students who wish to learn more about this important subject have few options: undergraduate macro texts usually devote no more than a chapter to growth, while journal articles and graduate texts (with their differential equations and Hamiltonians) are well beyond the reach of most students… Foley and Michl have filled this lacuna. A major feature of the volume is its coverage of alternative approaches to growth and distribution. This distinguishes it from standard macro texts…which deal only with neoclassical models… It should appeal to students who find theoretical models dry and irrelevant unless they can be readily applied to real economies… The volume provides a masterful and authoritative presentation of growth and distribution approaches. The elegant, formal presentation of models is nicely complemented with empirical applications and precise verbal discussion of the underlying issues involved.”—Amitava Krishna Dutt, Eastern Economic Journal

“A very readable and clear introduction to the modern macroeconomic analysis of economic growth. The reader is led through the very important subject matter in clear, careful steps and is brought to the frontier of the literature by the two highly qualified authors.”—William J. Baumol, New York University

“This is a remarkably clear and insightful account of alternative approaches to the theory of distribution and growth. While the attention focuses on the modern Classical approach, derived from the analyses of the old masters from Adam Smith to Ricardo and Marx, Keynesian, traditional Neoclassical and ‘new’ growth theories are also dealt with in some depth. The book tackles the important issues of renewable and exhaustible resources and of money and growth, issues often neglected in the respective literature. In addition, it discusses in an illuminating way the politically controversial issues of the impact of government debt and social security systems on growth and the pace of technical change. The sound analytical work is complemented by substantial empirical studies. The student is provided with all the necessary concepts and tools needed in order to do original work. The work is well written, the subject matter carefully arranged and a number of well selected problems allow the student to test his or her acquired knowledge.”—Heinz D. Kurz, University of Graz