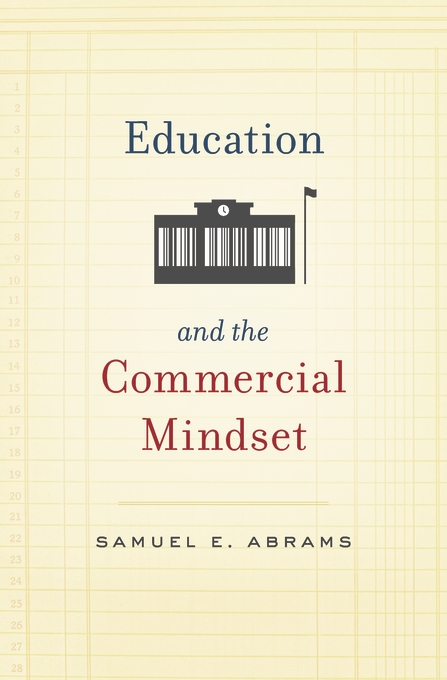 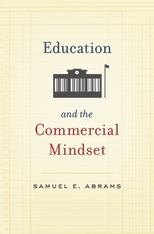 “Given the near-complete absence of public information and debate about the stealth effort to privatize public schools, this is the right time for the appearance of [this book]. Samuel E. Abrams, a veteran teacher and administrator, has written an elegant analysis of the workings of market forces in education in his book Education and the Commercial Mindset.”—Diane Ravitch, New York Review of Books

“Education and the Commercial Mindset provides the most detailed and comprehensive analysis of the school privatization movement to date. Students of American education will learn a great deal from it.”—Leo Casey, Dissent

“In Education and the Commercial Mindset, Abrams provides a detailed, informative and insightful account of the rise and fall of The Edison Project, as a case study of for-profit schools… Abrams demonstrates that for-profit schools have no incentives to consider long term educational or social goals. Obsessed with achievement metrics that might persuade consumers to purchase their product, they often exclude students with cognitive, emotional or behavioral problems. Or with failing grades… Running schools like businesses won’t solve the problem, Samuel Abrams makes clear.”—Glenn C. Altschuler, Huffington Post

“In recent years, several books have been published that explore the corporate influence on public education. Few are as in depth and as evenhanded as Education and the Commercial Mindset.”—American Educator

“This is a book that all supporters as well as opponents of school choice and educational privatization should read, because the hypotheses and findings are expressed so convincingly that they may serve as a field trial for testing one’s own opinions.”—Tommaso Agasisti, Educational Researcher

“Essential to understanding the new challenges facing American politics, with the future of the education system being a central issue… Abrams not only offers a historical overview of the education system crisis under the Reagan administration, but also a reminder of the failure of privatization attempts in the 1990s.”—Progressive Post

“In 1962, Raymond Callahan’s classic text Education and the Cult of Efficiency argued that the goal of efficient operations had become a first order priority in public education. Callahan’s work is now joined by a new definitive account, the brilliant book Education and the Commercial Mindset by Samuel E. Abrams… His arguments are exceptionally balanced, meticulously researched, and rooted in a deep understanding of the historical, cultural, and social antecedents of the widespread use of business practices and norms in education… Abrams has provided a thoughtful, critical, and rigorous explanation of crucially important distinctions that will be invaluable to scholars, policymakers, administrators, and teachers alike.”—Megan Tompkins-Stange, Teachers College Record

“Abrams describes eloquently the disconnect between the optimism underlying for-profit companies’ efforts to improve urban education and the realities that their schools faced. He also describes the history of KIPP charters, their accomplishments, and the limits of the KIPP model as a strategy for improving the life chances of urban children growing up in low-income families.”—Richard J. Murnane, coauthor of Restoring Opportunity

“Abrams’s book is the best, most insightful and comprehensive analysis of the modern-day efforts to manage schools like businesses. It is beautifully written and documented with careful research.”—Diane Ravitch, author of The Death and Life of the Great American School System

“Lucid, thorough, and balanced, Education and the Commercial Mindset is a riveting analysis of current education policy and how we got here. It will serve as an invaluable resource for policymakers involved in urban school reform.”—David Rogers, author of 110 Livingston Street

“Abrams provides a comprehensive and insightful analysis of the private sector’s foray into public education. His analysis of Edison Schools, an educational management organization, demonstrates why private sector practices may easily be applied to purchasing scheduling software or contracting bus service, but why they cannot be easily applied to the management of schools where the purpose and process of education is much more complex and opaque. He also examines charter school organizations, the use of publicly funded vouchers for students to attend private schools in Chile and Sweden, and the application of business practices to schools in Finland. Altogether, Abrams makes a compelling case on the limits of private sector practices in public education.”—Russell W. Rumberger, author of Dropping Out

“Grounded in meticulous research in Finland and Sweden as well as the United States, Education and the Commercial Mindset is a bracing assessment of contemporary education reform and its consequences.”—Pasi Sahlberg, author of Finnish Lessons