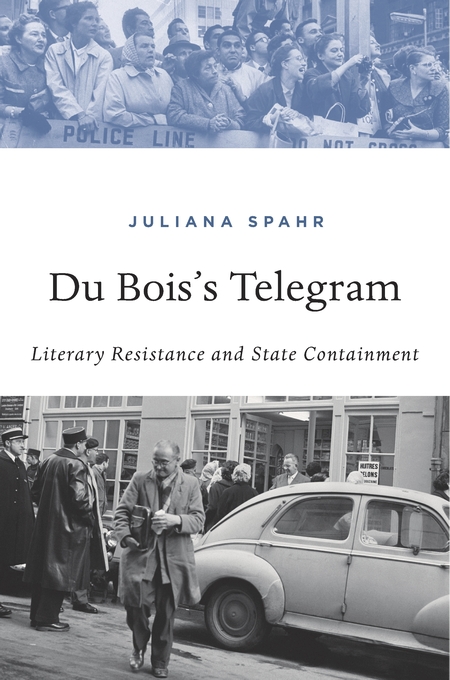 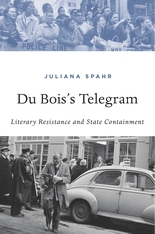 In 1956 W. E. B. Du Bois was denied a passport to attend the Présence Africaine Congress of Black Writers and Artists in Paris. So he sent the assembled a telegram. “Any Negro-American who travels abroad today must either not discuss race conditions in the United States or say the sort of thing which our State Department wishes the world to believe.” Taking seriously Du Bois’s allegation, Juliana Spahr breathes new life into age-old questions as she explores how state interests have shaped U.S. literature. What is the relationship between literature and politics? Can writing be revolutionary? Can art be autonomous, or is escape from nations and nationalisms impossible?

Du Bois’s Telegram brings together a wide range of institutional forces implicated in literary production, paying special attention to three eras of writing that sought to defy political orthodoxies by contesting linguistic conventions: avant-garde modernism of the early twentieth century; social-movement writing of the 1960s and 1970s; and, in the twenty-first century, the profusion of English-language works incorporating languages other than English. Spahr shows how these literatures attempted to assert their autonomy, only to be shut down by FBI harassment or coopted by CIA and State Department propagandists. Liberal state allies such as the Ford and Rockefeller foundations made writers complicit by funding multiculturalist works that celebrated diversity and assimilation while starving radical anti-imperial, anti-racist, anti-capitalist efforts.

Spahr does not deny the exhilarations of politically engaged art. But her study affirms a sobering reality: aesthetic resistance is easily domesticated.