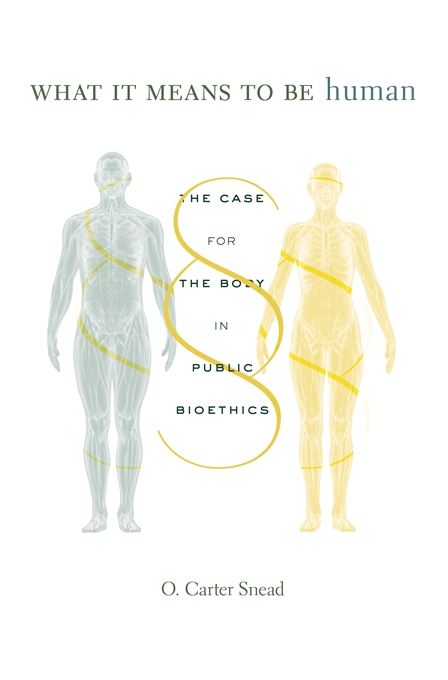 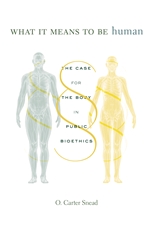 What It Means to Be Human

The Case for the Body in Public Bioethics

“A rare achievement: a rigorous academic book that is also accessible, engaging, and wise… By sketching out an ethic of mutual obligation rooted in our common vulnerabilities, the book opens a path toward a more humane society… Among the most important works of moral philosophy produced so far in this century.”—Yuval Levin, Wall Street Journal

“With insight and provocation, Snead, a bioethicist, examines the questions that abortion raises about the meaning of human life.”—Joshua Prager, New York Times

“A book rich in scholarship but for a much wider audience than scholars. The content of our bioethics will shape the course of our human future. That’s what makes this book so valuable.”—Charles J. Chaput, First Things

“Illuminates the ways in which our flawed anthropology—our wrongheaded ideas about what it means to be human—negatively affects our bioethics… The lengthy section on abortion alone is worth the price of admission.”—Alexandra DeSanctis, National Review

“Doesn’t mire itself in the latest bioethics debates, most of which have become dizzyingly complex in the past few years. Instead, it returns us, not a moment too soon, to a discussion of first principles… Advance[s] an anthropological framework for understanding human beings (and for devising laws and policies) that takes birth and death, youth and age, ability and limits—essentially the embodied self—into account.”—Nora Kenney, National Review

“Snead makes it clear that simply debating the morality of abortion, euthanasia, and assisted reproduction is not sufficient… We have to ground our definitions, debates, and catechisms in anthropology, in what it means to be human. If we are to love and defend our weak, vulnerable, and dependent neighbors, we ought also remember that we, too, will be weak, vulnerable, and dependent someday. This is what being human is, and our laws and policies should reflect it.”—John Stonestreet and Roberto Rivera, Christian Post

“One of the world’s leading bioethicists… Snead issues a thought-provoking challenge to our modern legal regime that is premised upon a misconception of the human person.”—Maureen Ferguson, Daily Signal

“[A] penetrating analys[is]s of modern bioethics and culture with a strong to arms to reorient ourselves and polity to moral sanity.”—Paul Tuns, The Interim

“A valuable resource for people eager to understand how abortion law changed so quickly in less than one generation.”—William C. Davis, Ordained Servant

“Offers a counterweight to the legal scholarship that, at present, is doubling down on expressive individualism… The book provides several answers to the question of why the U.S. law has embraced expressive individualism so fervently. Snead suggests American individualism, an obsession with sexual freedom, industry ([assisted reproductive technologies] and health care generally), power, and a die that was cast at the dawn of our public bioethics.”—Helen M. Alvaré, The Thomist

“This remarkable and insightful account of contemporary public bioethics and its individualist assumptions is indispensable reading for anyone with bioethical concerns. Whether you agree or disagree with Snead’s perspective, all will be in his debt for this critical work.”—Alasdair MacIntyre, author of After Virtue

“O. Carter Snead has written a brilliantly insightful book about how American law has enshrined individual autonomy as the highest moral good. He suggests an alternative foundation for contemporary bioethics, based on an understanding of human beings as social creatures, embedded in mutually dependent physical bodies. Highly thought-provoking.”—Francis Fukuyama, author of Identity: The Demand for Dignity and the Politics of Resentment

“Faulty anthropology makes for faulty law, especially when the subject is human life itself. Through a meticulous analysis of American legal cases touching the beginnings and ends of life, O. Carter Snead demonstrates how our entire approach to bioethical matters ironically ignores the lived reality and value of human embodiment, pointing the way to a richer approach that will promote social solidarity. A most significant achievement!”—Leon R. Kass, Chairman, President’s Council on Bioethics (2002–2005)

“What It Means to Be Human belongs on the desk of anyone concerned about the challenges ahead in the field of public bioethics. After taking a hard look at the flawed assumptions that shape most of today’s thinking, Snead outlines an approach firmly grounded in the complexity of human experience.”—Mary Ann Glendon, author of The Forum and the Tower

“Public bioethics has for too long labored under the illusion that its purpose is to maximize individual choice. Snead shows how this results in policies that are hostile to human beings as they actually are: essentially embodied, ever dependent on others, flourishing only when loving and being loved. This is required reading.”—Farr Curlin, Trent Center for Bioethics, Duke University