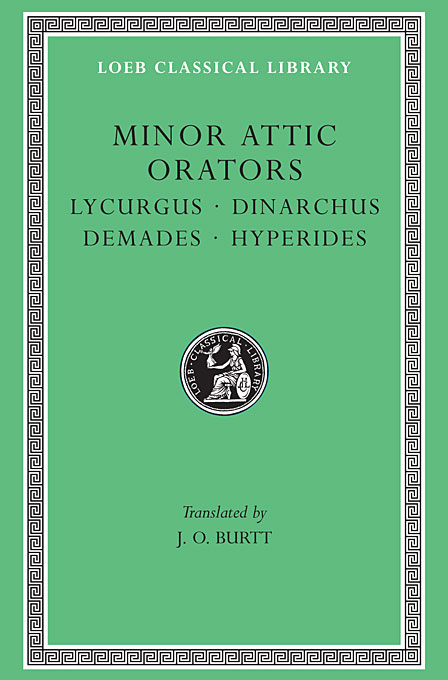 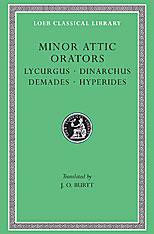 This volume collects the speeches of four orators involved in the ill-fated resistance of Athens to the power of Philip and Alexander the Great of Macedon.

Lycurgus of Athens, ca. 396–325 BCE, concentrated on domestic affairs, especially financial, which he managed for twelve years, and naval matters. He also constructed and repaired important public buildings. Athens refused to surrender him to Alexander and honoured him until his death.

Dinarchus of Corinth, ca. 361–291, as resident alien in Athens became a forensic speaker and also assailed Demosthenes and others. He was accused by Alexander’s runaway treasurer Harpalus of corruption. Dinarchus favoured oligarchic government under Macedonian control. He prospered under the regency of Demetrius Phalereus (317–307), but was exiled after the restoration of democracy, returning ca. 292.

Demades of Athens, ca. 380–318, was an able seaman, then unscrupulous politician. He favoured Philip, but fought for Athens at Chaeronea (338). Captured there and released by Philip, he helped to make peace, and later influenced Alexander and then Antipater in Athens’ favour. But acceptance of bribes and his tortuous policy ruined him and he was executed by Antipater.

Hyperides of Athens, ca. 390–322, was a forensic and political speaker who was hostile to Philip and led Athens’ patriots after 325. For resistance to Antipater he ultimately met death by violence. What survives today of his speeches was discovered in the nineteenth century.

This is the second in a two-volume edition of Greek orators. The first collects the speeches of Antiphon and Andocides.