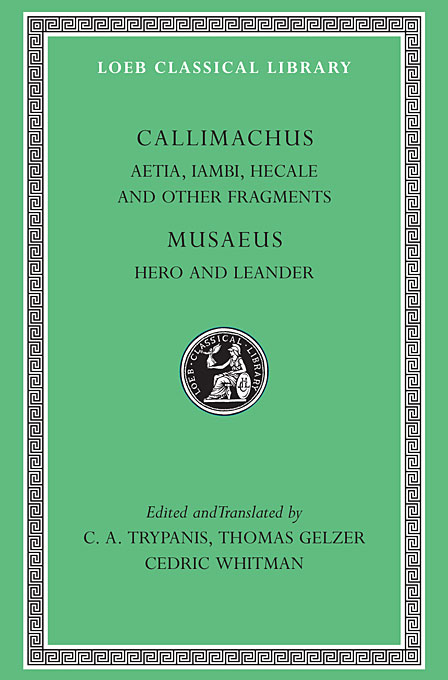 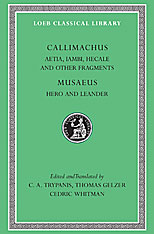 Edited and translated by C. A. Trypanis

Callimachus of Cyrene, born ca. 310 BCE, after studying philosophy at Athens, became a teacher of grammar and poetry at Alexandria. Ptolemy II Philadelphus of Egypt (reigned 285–247) made him when still young a librarian in the new library at Alexandria; he prepared a great catalogue of its books.

Callimachus was author of much poetry and many works in prose, but not much survives. His hymns and epigrams are given with works by Aratus and Lycophron in another volume (no. 129) of the Loeb Classical Library. In the present volume are included fragments of the Aetia (Causes), aetiological legends concerning Greek history and customs; fragments of a book of Iambi; 147 fragments of the epic poem Hecale, which described Theseus’s victory over the bull which infested Marathon; and other fragments.

We have no explicit information about the poet Musaeus, author of the short epic poem on Hero and Leander, except that he is given in some manuscripts the title Grammatikos, a teacher learned in the rhetoric, poetry and philosophy of his time. He was obviously a follower of the Egyptian poet Nonnus of Panopolis, of the fifth century AD, and his poem seems also to presuppose the Paraphrase of the Psalms of Pseudo-Apollinarius which can be dated to the period 460–470.

Musaeus takes up a subject whose first detailed treatment is preserved in Ovid’s Heroides (Epistles 18 and 19), but he presents it in a quite different manner. Among the literary antecedents to which this learned grammatikos expressly alludes, the most prominent are Books 5 and 6 of the Odyssey and Plato’s Phaedrus. He draws too on the Hymns of Proclus and the Metaphrasis of the Gospel of St. John by Nonnus. He was most probably a Christian Neoplatonist writing a Christian allegory.