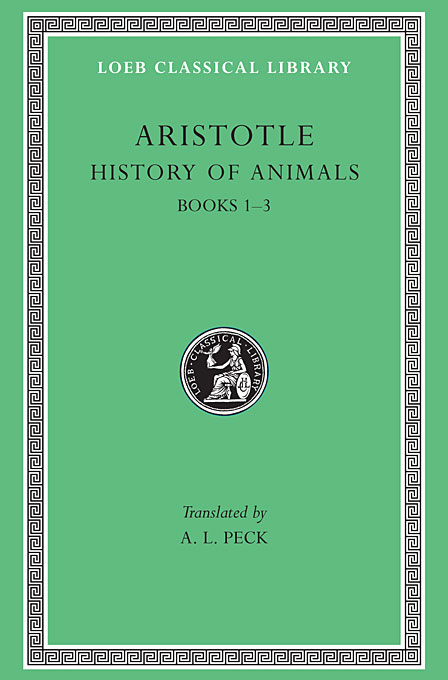 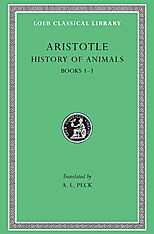 History of Animals, Volume I

Translated by A. L. Peck

In History of Animals, Aristotle analyzes “differences”—in parts, activities, modes of life, and character—across the animal kingdom, in preparation for establishing their causes, which are the concern of his other zoological works. Over 500 species of animals are considered: shellfish, insects, birds, fish, reptiles, amphibians, and mammals—including human beings.

In Books I–IV, Aristotle gives a comparative survey of internal and external body parts, including tissues and fluids, and of sense faculties and voice. Books V–VI study reproductive methods, breeding habits, and embryogenesis as well as some secondary sex differences. In Books VII–IX, Aristotle examines differences among animals in feeding; in habitat, hibernation, migration; in enmities and sociability; in disposition (including differences related to gender) and intelligence. Here too he describes the human reproductive system, conception, pregnancy, and obstetrics. Book X establishes the female’s contribution to generation.

The Loeb Classical Library edition of History of Animals is in three volumes. A full index to all ten books is included in the third (Volume XI of the Aristotle edition).

Aristotle’s biological corpus includes not only History of Animals, but also Parts of Animals, Movement of Animals, Progression of Animals, Generation of Animals, and significant parts of On the Soul and Parva Naturalia. Aristotle’s general methodology—“first we must grasp the differences, then try to discover the causes” (Ha 1.6)—is applied to the study of plants by his younger co-worker and heir to his school, Theophrastus: Enquiry into Plants studies differences across the plant kingdom, while De Causis Plantarum studies their causes. In the later ancient world, both Pliny’s Natural History and Aelian’s On the Characteristics of Animals draw significantly on Aristotle’s biological work.