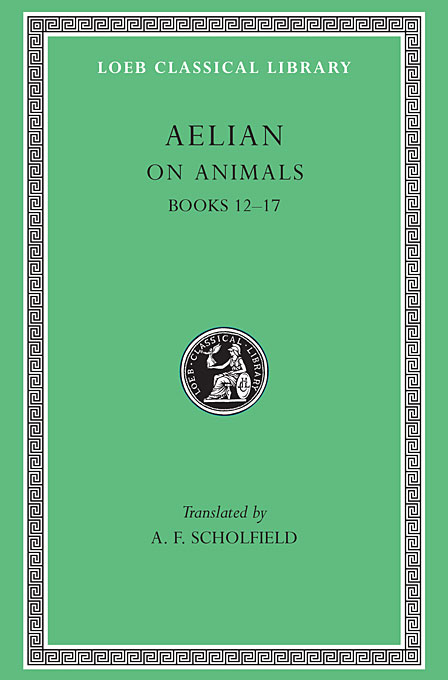 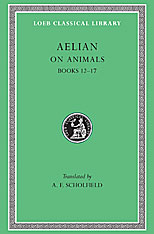 Translated by A. F. Scholfield

Aelian (Claudius Aelianus), a Roman born ca. 170 CE at Praeneste, was a pupil of the rhetorician Pausanias of Caesarea, and taught and practised rhetoric. Expert in Attic Greek, he became a serious scholar and studied history under the patronage of the Roman empress Julia Domna. He apparently spent all his life in Italy where he died after 230 CE.

Aelian’s On the Characteristics of Animals, in 17 books, is a collection of facts and beliefs concerning the habits of animals drawn from Greek authors and some personal observation. Fact, fancy, legend, stories and gossip all play their part in a narrative which is meant to entertain readers. If there is any ethical motive, it is that the virtues of untaught yet reasoning animals can be a lesson to thoughtless and selfish mankind. The Loeb Classical Library edition of the work is in three volumes.

The Historical Miscellany (Loeb no. 486) is of similar nature. In 14 books, it consists mainly of historical and biographical anecdotes and retellings of legendary events. Some of Aelian’s material is drawn from authors whose works are lost.

Aelian’s Letters—portraying the affairs and country ways of a series of fictitious writers—offer engaging vignettes of rural life. These are available in Loeb no. 383.