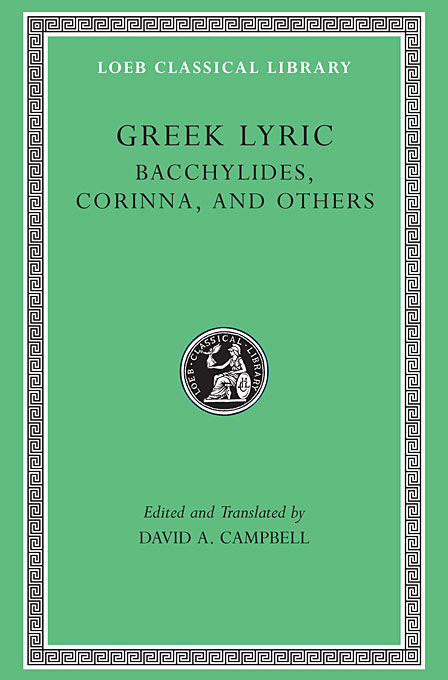 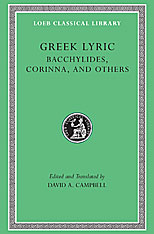 Bacchylides, nephew of Simonides and rival of Pindar, wrote choral poetry of many types. We have a number of his victory odes—poems celebrating victories in athletic contests—as well as dithyrambs and other hymns. He was a master of the captivating narrative. Also represented in this volume is the Boeotian Corinna, whose work, versions of local myths, survives in greater quantity than that of any other Greek woman poet except Sappho. Ancient authorities regarded Corinna as an older contemporary and mentor of Pindar; but some modern scholars place her later, in the third century BCE. Other women are here too: Myrtis, also from Boeotia; Telesilla of Argos, famous for her military leadership as well as her hymns; the shadowy Charixena; and Praxilla of Sicyon, author of choral poems and drinking songs.

David Campbell gives all the extant verse of these poets, along with the ancients’ accounts of their lives and works. This fourth volume of his much-praised edition of Greek lyric poetry also includes Timocreon of Rhodes, pentathlete and writer of invective; Diagoras of Melos, choral poet and alleged atheist; and Ion of Chios. Sophocles is represented by fragments of his paean Asclepius, Euripides by the few surviving lines of his ode for Alcibiades’ dazzling victory in the chariot race at Olympia.

This is the fourth in a five-volume edition of Greek lyric poets. Sappho and Alcaeus, the illustrious singers of sixth-century Lesbos, are in the first. Volume II contains the work of Anacreon, composer of solo song; the Anacreontea; and the earliest writers of choral poetry, notably the seventh-century Spartans Alcman and Terpander. Stesichorus, Ibycus, Simonides, and other sixth-century poets are in Volume III. The last volume includes the new school of dithyrambic poets (mid-fifth to mid-fourth century), together with the anonymous poems: drinking songs, children’s songs, cult hymns, and others.