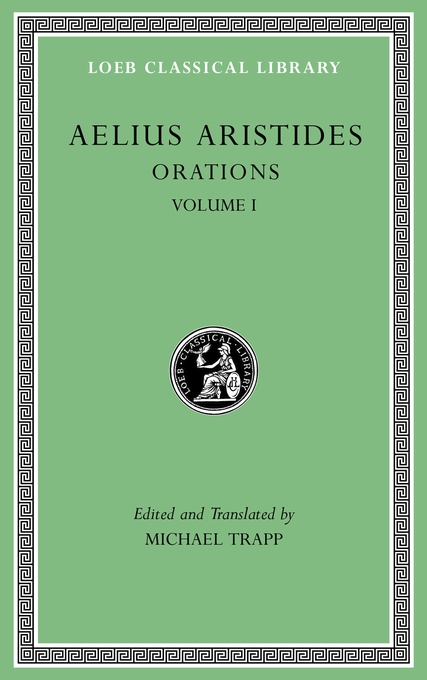 Edited and translated by Michael Trapp

Publius Aelius Aristides Theodorus was among the most celebrated authors of the Second Sophistic and an important figure in the transmission of Hellenism. Born to wealthy landowners in Mysia in 117, he studied in Athens and Pergamum before he fell chronically ill in the early 140s and retreated to Pergamum’s healing shrine of Asclepius. By 147 Aristides was able to resume his public activities and pursue a successful oratorical career. Based at his family estate in Smyrna, he traveled between bouts of illness and produced speeches and lectures, declamations on historical themes, polemical works, prose hymns, and various essays, all of it displaying deep and creative familiarity with the classical literary heritage. He died between 180 and 185.

This edition of Aristides, new to the Loeb Classical Library, offers fresh translations and texts based on the critical editions of Lenz-Behr (Orations 1–16) and Keil (Orations 17–53). Volume I contains the Panathenaic Oration, a historical appreciation of classical Athens and Aristides’ most influential work, and A Reply to Plato, the first of three essays taking issue with the attack on orators and oratory delivered in Plato’s Gorgias.