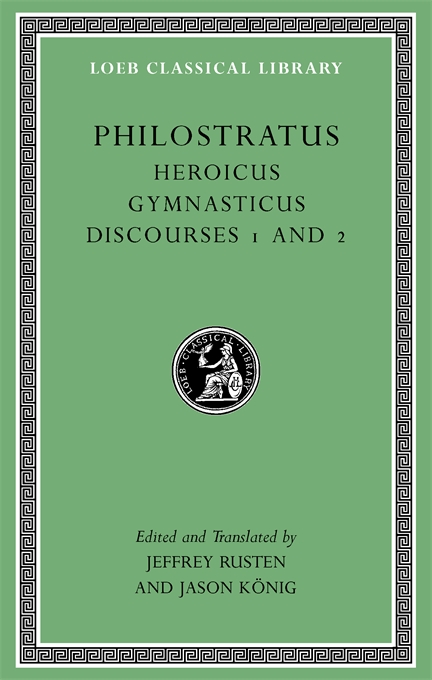 Edited and translated by Jeffrey Rusten

In the writings of Philostratus (ca. 170–ca. 250 CE), the renaissance of Greek literature in the second century CE reached its height. His Life of Apollonius of Tyana, Lives of the Sophists, and Imagines reconceive in different ways Greek religion, philosophy, and art in and for the world of the Roman Empire. In this volume, Heroicus and Gymnasticus, two works of equal creativity and sophistication, together with two brief Discourses (Dialexeis), complete the Loeb Classical Library edition of his writings.

Heroicus is a conversation in a vineyard amid ruins of the Protesilaus shrine (opposite Troy on the Hellespont), between a wise and devout vinedresser and an initially skeptical Phoenician sailor, about the beauty, continuing powers, and worship of the Homeric heroes. With information from his local hero, the vinedresser reveals unknown stories of the Trojan campaign especially featuring Protesilaus and Palamedes, and describes complex, miraculous, and violent rituals in the cults of Achilles.

Gymnasticus is the sole surviving ancient treatise on sports. It reshapes conventional ideas about the athletic body and expertise of the athletic trainer and also explores the history of the Olympic Games and other major Greek athletic festivals, portraying them as distinctive venues for the display of knowledge.