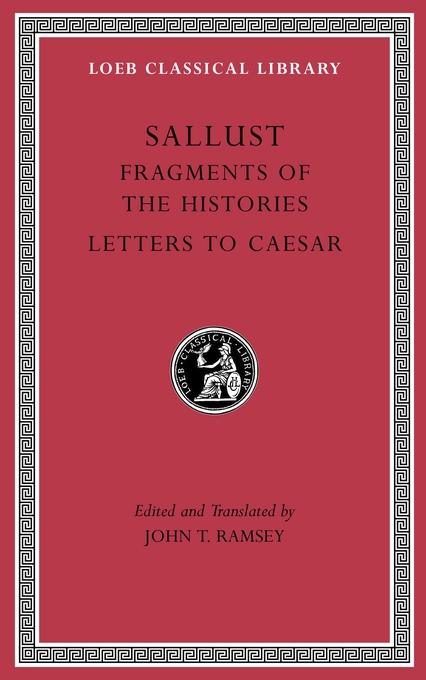 Fragments of the Histories. Letters to Caesar

Sallust, Gaius Sallustius Crispus (86–35 BCE), a Sabine from Amiternum, acted as tribune against Cicero and Milo in 52, joined Caesar after being expelled from the Senate in 50, was restored to the Senate by Caesar and took part in his African campaign as praetor in 46, and was then appointed governor of New Africa (Numidia). Upon his return to Rome he narrowly escaped conviction for malfeasance in office, retired from public life, and took up historiography. Sallust’s last work, the annalistic Histories in five books, is much more expansive than his monographs on Catiline and Jugurtha (LCL 116), treating the whole of Roman history at home and abroad in the post-Sullan age. Although fragmentary, it provides invaluable information and insight about a crucial period of history spanning the period from 78 to around 67 BCE.

Although Sallust is decidedly unsubtle and partisan in analyzing people and events, his works are important and significantly influenced later historians, notably Tacitus. Taking Thucydides as his model but building on Roman stylistic and rhetorical traditions, Sallust achieved a distinctive style, concentrated and arresting; lively characterizations, especially in the speeches; and skill at using particular episodes to illustrate large general themes.

For this volume, which completes the Loeb Classical Library edition of Sallust’s works, John T. Ramsey has freshly edited the Histories and the two pseudo-Sallustian Letters to Caesar, supplying ample annotation.