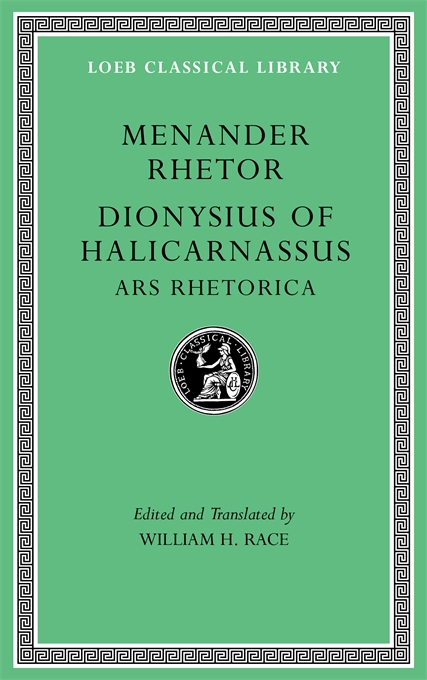 This volume contains three rhetorical treatises dating probably from the reign of Diocletian (AD 285–312) that provide instruction on how to compose epideictic (display) speeches for a wide variety of occasions both public and private. Two are attributed to one Menander Rhetor of Laodicea (in southwestern Turkey); the third, known as the Ars Rhetorica, incorrectly to the earlier historian and literary critic Dionysius of Halicarnassus. These treatises derive from the schools of rhetoric that flourished in the Roman Empire from the 2nd through 4th centuries AD in the Greek East. Although important examples of some genres of occasional prose were composed in the 5th and 4th centuries BC by Thucydides, Xenophon, Plato, and especially Isocrates, it was with the flowering of rhetorical prose during the so-called Second Sophistic in the second half of the 2nd century AD that more forms were developed as standard repertoire and became exemplary.

Distinctly Hellenic and richly informed by the prose and poetry of a venerable past, these treatises are addressed to the budding orator contemplating a civic career, one who would speak for his city’s interests to the Roman authorities and be an eloquent defender of its Greek culture and heritage. They provide a window into the literary culture, educational values and practices, and social concerns of these Greeks under Roman rule, in both public and private life, and considerably influenced later literature both pagan and Christian.

This edition offers a fresh translation, ample annotation, and texts based on the best critical editions.