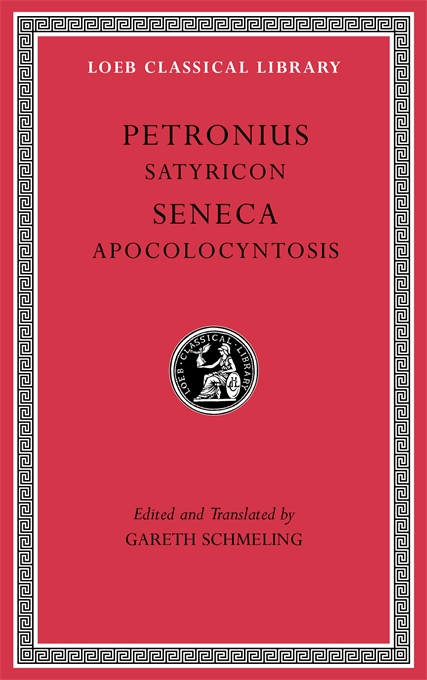 Edited and translated by Gareth Schmeling

The Satyrica (Satyricon liber), a comic-picaresque fiction in prose and verse traditionally attributed to the Neronian Petronius (d. AD 66) but possibly of Flavian or Trajanic date, survives only as fragments of a much larger whole. It takes the form of a first-person narrative by the endearing ne’er-do-well Encolpius, a brilliant storyteller, parodist, and mimic who recalls episodes from his past life as a wandering bohemian, living by his wits on the margins of society in Greek southern Italy and encountering a vividly realized array of characters from the early imperial demimonde, including the wealthy freedman Trimalchio, one of the most unforgettable characters in all of Latin literature.

Paired with the Satyrica, and likewise in prose and verse, is the Apocolocyntosis (Pumpkinification), a short satirical pamphlet lampooning the death, apotheosis, and attempt to enter heaven of the emperor Claudius (reigned 41–54). If the work of Lucius Annaeus Seneca (4 BC–AD 65), better known for his austere Stoic moralism, its sarcastic wit and rollicking humor were no doubt inspired by bitterness over his exile at Claudius’ hands in 41–49.

For this Loeb edition the Latin texts have been freshly edited and translated, with ample introductions and explanatory notes.