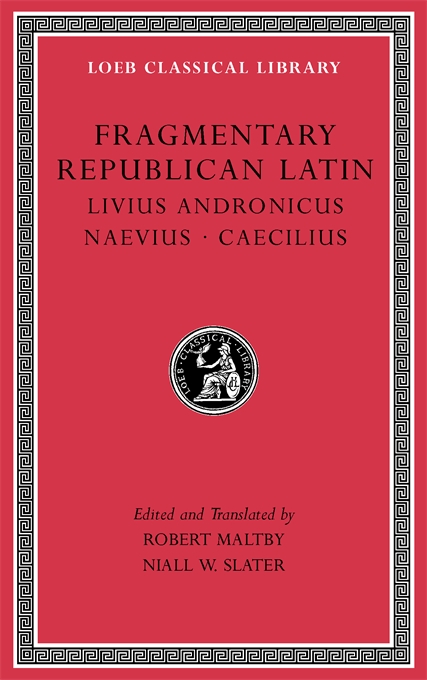 Edited and translated by Robert Maltby

Livius Andronicus (born ca. 292 BC) was regarded by the Romans as the founder of Latin literature, introducing tragedy and comedy, adapting Homer’s Odyssey into Saturnian verse, and composing a nationally important hymn for Juno. A meeting place for writers and actors was established in the temple of Minerva on the Aventine in recognition of his poetic achievements.

Naevius (born ca. 280–260), though most famous for his comedies, also wrote tragedy and epic. He innovated by incorporating Roman material into his Greek models and writing on Roman subjects independently. The inventor of the fabula praetexta, drama on a Roman theme, he also introduced new topics to Roman tragedy, especially those relating to Troy, and his Punic War, the first epic on a Roman historical subject, was a longtime school text and a favorite of Augustus.

Caecilius (born probably in the 220s), a friend of the older Ennius, excelled at comedy, of which he was Rome’s leading exponent during his career, and was so considered by posterity. Caecilius continued the Naevian practice of inserting Roman allusions into his works and was admired by later critics particularly for his substantive and well-constructed plots, and for his ability to arouse emotion.

The texts are based on the most recent and reliable editions of the source authors and have been revised, freshly translated, and amply annotated in light of current scholarship.