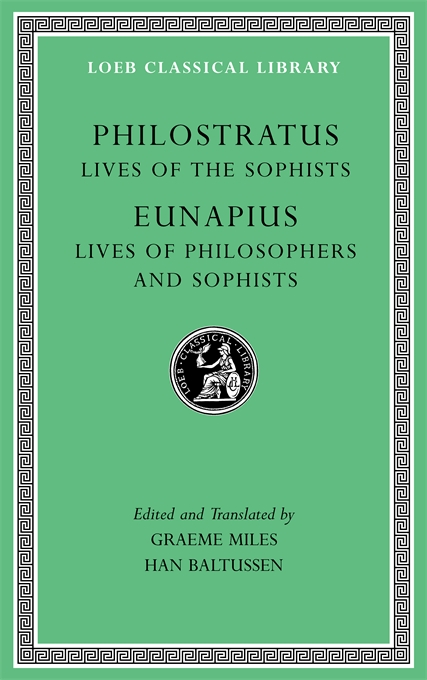 Lives of the Sophists. Lives of Philosophers and Sophists

Edited and translated by Graeme Miles

Two sophists on the history of sophistry.

Flavius Philostratus, known as “the Elder” or “the Athenian,” was born to a distinguished family with close ties to Lesbos in the later second century, and died around the middle of the third. A sophist who studied at Athens and later lived in Rome, Philostratus provides in Lives of the Sophists a treasury of information about notable practitioners. His sketches of sophists in action paint a fascinating picture of their predominant influence in the educational, social, and political life of the Empire in his time. He is almost certainly the author also of the Life of Apollonius of Tyana (LCL 16, 17, 458) and Heroicus and Gymnasticus (LCL 521).

Eunapius (ca. 345–415) was born in Sardis but studied and spent much of his life in Athens as a sophist and historian. His Lives of Philosophers and Sophists covers figures of personal or intellectual significance to him in the period from Plotinus (ca. 250) to Chrystanthus (ca. 380), including one remarkable woman, Sosipatra, and then focuses on Iamblichus and his students. The work’s underlying rationale combines personal devotion to teachers and colleagues with a broader attempt to rehabilitate Hellenic cultural icons against the rise of Christianity and the influence of its representatives.

This edition of Philostratus and Eunapius thoroughly revises the original edition by Wilmer C. Wright (1921) in light of modern scholarship.