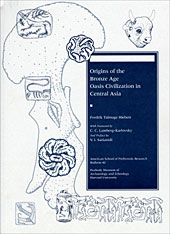 Origins of the Bronze Age Oasis Civilization in Central Asia

The Murghad River delta, the site of ancient Margiana, was extensively settled during at least part of the Bronze Age, between 2200 and 1750 B.C. Oases in an otherwise desert region, settlements were situated along deltaic branches of the river or canals dug from those branches. Excavations at one of the largest and most complex of these sites, Gonur depe, have been ongoing for many years under the direction of Victor Sarianidi. During the 1988–89 field season, Fred Hiebert excavated part of Gonur in collaboration with the Ministry of Culture of Turkmenistan and the Institute of Archaeology in Moscow.

Published here, the results provide a key to understanding the large corpus of material of the Bactro-Margiana Archaeological Complex extracted over the past 30 years from this and neighboring sites of the Oxus civilization.