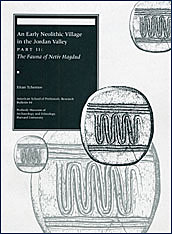 An Early Neolithic Village in the Jordan Valley, Part II: The Fauna of Netiv Hagdud

The “Neolithic Revolution” in Southwestern Asia involved major transformations of economy and society that began during the Natufian period in the southern Levant and continued through Pre-Pottery Neolithic A (PPNA) and into Pre-Pottery Neolithic B (PPNB). The authors describe that process at Netiv Hagdud, with additional material from the Natufian site of Salibiya IX. Includes reports on the archaeology, lithics, bone tools, lithic use-wear, marine shells, burials, and plant remains.