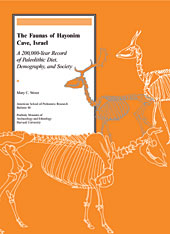 The Faunas of Hayonim Cave, Israel

A 200,000-Year Record of Paleolithic Diet, Demography, and Society

A decade of zooarchaeological fieldwork (1992-2001) went into Mary Stiner’s pathbreaking analysis of changes in human ecology from the early Mousterian period through the end of Paleolithic cultures in the Levant. Stiner employs a comparative approach to understanding early human behavioral and environmental change, based on a detailed study of fourteen bone assemblages from Hayonim Cave and Meged Rockshelter in Israel’s Galilee. Principally anthropological in outlook, Stiner’s analysis also integrates chemistry, foraging and population ecology, vertebrate paleontology, and biogeography. Her research focuses first on the formation history, or taphonomy, of bone accumulations, and second on questions about the economic behaviors of early humans, including the early development of human adaptations for hunting large prey and the relative "footprint" of humans in Pleistocene ecosystems of the Levant.