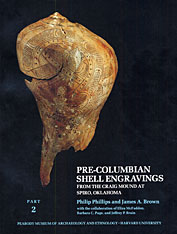 The Craig Mound at Spiro, Oklahoma was the richest source of pre-Columbian shell engravings in North America, a treasury of early native American artistry. From about AD 1250 until the early part of this century, it remained virtually undisturbed, but in 1933, it was plundered by commercial diggers. The fragments of the shell cups and gorgets became widely scattered, as museums and private collectors sought to acquire them. It is only through the publication of this work that the pieces have been put back together.

These lavishly illustrated volumes showcase the variety of iconography and of the engravers.