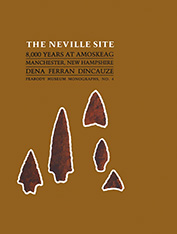 The 1968 excavation of the Neville Site in Manchester, New Hampshire, was a major event in the archaeological history of New England. Analysis of the site extended the known duration of continuous occupation in the region by some 3,000 years and demonstrated early connections between the New England area and the Southeast. The Neville Site was first occupied nearly 8,000 years ago, when the Eastern coastal plain from North Carolina to New Hampshire was essentially a single cultural province. Current excavations in Manchester have reinvigorated interest in the archaeology of New Hampshire and created a demand for this facsimile edition of the original 1976 publication.