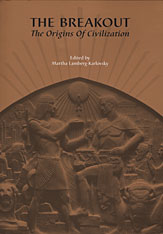 The Origins of Civilization

For much of the twentieth century, Mesopotamia was thought to he the singular “Cradle of Civilization,” and the agents of change that brought it about were thought to be demographic, ecological, and technological. Bronze Age Mesopotamian accomplishments were believed to have diffused outward, influencing the development of civilization in the rest of the world. Part of this Mesopocentric view was revised as archaeological evidence revealed that other unique civilizations had existed in both the Old and New Worlds, but the traditional Near Eastern pattern of development continued to serve as a model.

In the mid-1980s, however, Harvard’s Kwang-chih Chang proposed in Symbols—a publication of Harvard’s Peabody Museum and Department of Anthropology—that China’s first civilization did not evolve according to the conventional Mesopotamian model and argued instead for a new paradigm for understanding the origins of civilization in ancient China and the New World.

In this collection of subsequent Symbols articles and other essays, Maya and Near Eastern studies specialists engage in a stimulating debate of Chang’s thesis, also presented here.