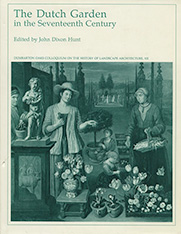 Dumbarton Oaks Colloquium on the History of Landscape Architecture 12

Dutch Garden in the Seventeenth Century

In 1988–1989 the three hundredth anniversary of an important historical event, the ascension of William and Mary to the thrones of England and Scotland, was celebrated in the Netherlands, the United Kingdom, and the United States of America. The symposium on Dutch garden art held at Dumbarton Oaks in May 1988 was the only scholarly event during the anniversary year that focused wholly upon gardens.

This wide-ranging collection of essays charts the history, scope, and spread of Dutch garden art during the seventeenth century. A group of scholars, mostly Dutch, surveys what has been called the “golden age” of Dutch garden design. Essays discuss the political context of William’s building and gardening activities at his palace of Het Loo in the Netherlands; the development of a distinctively Dutch garden art during the seventeenth century; country house poetry; and specific estates and their gardens, such as those of Johan Maurits van Nassau-Siegen at Cleves or Sorgvliet, the estate of Hans Willem Bentinck, later the Earl of Portland. Other contributions concern typical Dutch planting and layouts, with a focus upon Jan van der Green’s much-circulated Den Nederlandtsen Hovenier; the designs of Daniel Marot, the Huguenot refugee from France, who worked for William III in both the Netherlands and England; and the attitudes of the English toward Dutch gardening as it was observed in practice and mythologized through the distorting lens of national cooperation and rivalries.