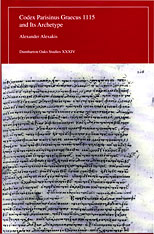 Codex Parisinus Graecus 1115 and Its Archetype

For almost three centuries, scholars have debated the credibility of the information provided in the colophon of Codex Parisinus graecus 1115. According to this inscription, the manuscript was copied in the year 1276 from another manuscript dating back to the year 774/5; the archetype originated in the papal library at Rome and contains a partial record of the Greek holdings of the library.

The majority of the texts included in the manuscript come from florilegia related to the ecumenical councils. This volume examines the use of florilegia—anthologies of earlier writings—by these councils. Analysis of the contents of the manuscript provides new information concerning, among other things, the beginning of the Filioque controversy and the use of Iconophile florilegia by the seventh ecumenical council in 787. Also revealed is the archetype’s role in the negotiations between Rome and Constantinople that led to the Union of the Churches, proclaimed at the Council of Lyons II in 1274, and the indirect involvement of Thomas Aquinas through his Contra Errores Graecorurn.