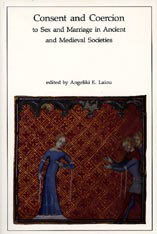 This collection of essays addresses a number of questions regarding the role of consent in marriage and in sexual relations outside of marriage in ancient and medieval societies. Ranging from ancient Greece and Rome to the Byzantine Empire and Western Medieval Europe, the contributors examine rape, seduction, and the role of consent in establishing the punishment of one or both parties; the issue of marital debt and spousal rape; and the central question of what is perceived as coercion and what may be the validity or value of coerced consent. Other concepts, such as honor and shame, are also investigated.

Because of the wide range—in time and place—of societies studied, the reader is able to see many different approaches to the question of consent and coercion as well as a certain evolution, in which Christianity plays an important role.