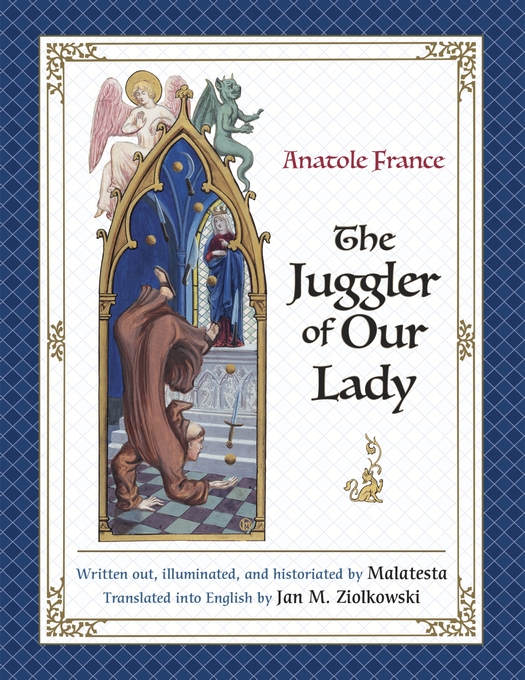 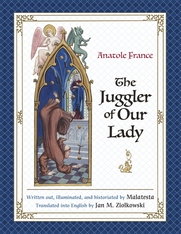 The Juggler of Our Lady

Once upon a time, there lived a humble juggler, Barnaby by name, who was skillful but suffered every winter from poverty. A devotee of the Virgin, he had few failings apart from enjoying drink a little too much. One day he met a monk, who persuaded him to enter a monastery. All the brethren had exceptional skills to exercise on behalf of Mary, but the juggler felt he had nothing worthy to offer. Finally, he had the notion to juggle copper balls and knives before the altar of the Virgin in the chapel. The others caught him in the act and deemed his behavior madness, but after seeing the Mother of God descend to soothe him, they realized that he was blessed.

In 1890, Anatole France (1844–1924) adapted this medieval French poem as the short story “Le jongleur de Notre-Dame,” republished in 1906 with illustrations by Henri Malteste (1881–1961)—who signed his work “Malatesta”—a specialist in medievalesque illustrations and calligraphy. Dumbarton Oaks is pleased to bring this version back for the enjoyment of modern audiences both young and old, with artwork reproduced from original gouaches, and a translation by Jan M. Ziolkowski facing the French text.