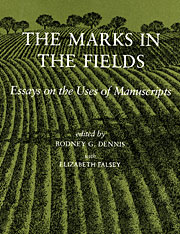 The Marks in the Fields

Essays on the Uses of Manuscripts

With Elizabeth A. Falsey

In celebration of the fiftieth anniversary of Harvard’s Houghton Library in 1992, Curator of Manuscripts Rodney Dennis asked a stellar cast of critics, historians, and curators to write on items selected from the library’s rich trove of manuscripts, which ranges from the papyrus fragments and ostraca of Antiquity to the papers of such modern figures as Elizabeth Bishop and Leon Trotsky. The result was The Marks in the Fields, an extraordinary collection of essays by the likes of Helen Vendler, Christopher Ricks, and Lawrence Buell, which, in Dennis’s words, combine to highlight “the natural patterns” found in manuscripts of all times and places, patterns that “go on occurring, everywhere and forever astonishing the mind.”