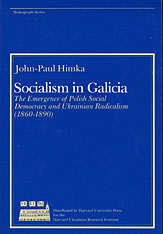 The Emergence of Polish Social Democracy and Ukrainian Radicalism

The linkages between nationalism and socialism and the nature of peasant and artisan politics in East Europe are the fundamental problems engaged by this study of socialism in nineteenth-century Galicia. Here, in imperial Austria’s largest and easternmost crown land, Polish and Ukrainian socialists organized journeyman artisans and recently emancipated peasants into potent political forces. The origins of the socialist movements lay in democratic national movements formed in response to the introduction of the Austrian constitution. The movements crystallized into socialist political parties against the background of strained relations between the nationalities and the opening of Galicia’s undeveloped economy to the industrial West.