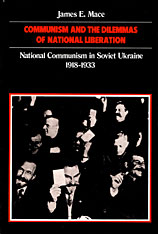 Communism and the Dilemmas of National Liberation

In 1917, the Russian Empire disintegrated into a number of local regimes, presaging what would happen to Austria-Hungary the following year. In contrast to what happened in the Habsburg lands, Lenin’s Bolsheviks, self-proclaimed anti-imperialists, managed to reconquer most of Russia’s former colonies but discovered that they could not create stable regimes without granting some concessions to national aspirations. This led in 1923 to the adoption of a policy of korenizatsiia (indigenization): official sponsorship of non-Russian cultural development and active recruitment of non-Russians into the regimes of the so-called borderlands of the empire.

The twenty-three million Ukrainians who found themselves under Soviet rule after the defeat of the independent Ukrainian Peoples Republic largely accepted the opportunities afforded by Ukrainization, the local version of korenizatsiia, and pushed it farther than any of its counterparts. Many prominent émigrés returned to help develop their national culture and sparked a flowering of aesthetic and intellectual creativity unique in Ukrainian history. Ukrainians refer to this brief period as the rozstriliane vidrodzhennia, the executed rebirth, because of its abrupt and violent suppression in the 1930s.

Ukrainization originally meant active recruitment of Ukrainians into the Communist Party and Soviet state. Soon it became apparent that it had actually legitimized a certain measure of Ukrainian aspirations within the Party itself. Ukrainian communists came to demand far greater self-determination than Moscow would tolerate. Those who made such demands in the 1920s were labelled “national deviationists” and cast beyond the pale, but not before the issues they raised engulfed the regime in a major political crisis.