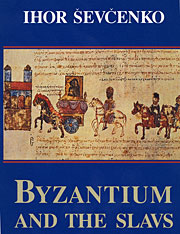 Byzantium and the Slavs

In Letters and Culture

These reprints of articles, reviews, and other short pieces by the well-known Byzantinist, Ihor Ševčenko, are gathered together in one volume for the first time. The collection reflects the author’s wide-ranging interests and his significant contributions to the study of the relationship between Byzantine and East Slavic culture. A number of the original articles have been provided with addenda by the author.

Among the articles are the author’s now famous study, “Fragments of the Toparcha Gothicus,” in which he demonstrates their nineteenth-century provenance at the hands of their “discoverer” Karl Benedikt Hase; the analysis of the impact on Muscovite political ideology of the writings of Deacon Agapetus; the discovery of the Greek prose original of the putative poem contained in the Life of the Slavic Apostle Cyril; and the find, made at St. Catherine’s Monastery, of Constantine Tischendorf’s letters regarding the transfer of the Codex Sinaiticus to St. Petersburg. Other articles include the author’s studies on the impact of Byzantine elements in early Ukrainian culture and in some Kievan texts; and his observations on Byzantine social history at the time of the Slavic Apostles. Ševčenko offers these studies up as a challenge to the younger generation of scholars engaged in new approaches within these fields. Of further interest to Byzantinists and Slavists alike are the author’s reviews and retrospectives, including retrospectives of George Christos Soulis, George Ostrogorsky, Francis Dvornik, and Michael Cherniavsky.

Taken as a whole, the volume is a lively guide along a varied journey through the world of Byzantium and the Slays and reconstructs the relationship between the two in the light of texts, both literary and scientific. It also reflects the history of Slavic and Byzantine studies in the United States and Europe.