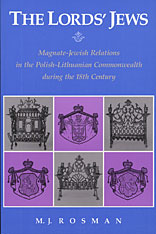 In the first in-depth exploration of the relationship between Jews and magnates in the Polish-Lithuanian Commonwealth, M. J. Rosman shows the influence of the Jews on economic, social, and political life in the Polish, Ukrainian, and Belorussian territories, and offers new perspectives on their relations with magnates. Rosman focuses on two major questions: What were the principal spheres of interaction between the Jews and the nobility? What was the significance of this interaction for both parties?

By analyzing the Sieniawski-Czartoryski estates the author demonstrates the measure of cooperation that existed between magnates and Jews. Jews guaranteed the viability of important economic institutions and provided commercial services, while magnates furnished an environment for Jews to conduct their religious and commercial activities. Drawing on Polish, Hebrew, and Yiddish sources and literature from archives and libraries in Poland, Israel, and the United States, Rosman provides a richly detailed account of the socioeconomic development of early modern Europe’s largest Jewish community.